Troy Deeney: Everyone thinks I hate Arsenal after my ‘Cojones’ remark, I don’t and Arteta has them going right way

EVER since I claimed that their team lacked ‘cojones’ five years ago, every Arsenal supporter seems to think I hate them.

Even my own missus, Alisha, who is an avid Gooner, thinks I can’t stand them, too!

But it simply isn’t true.

I grew up on Arsenal being great. I was a massive fan of Ian Wright and the classic Arsenal back four featuring Tony Adams and Steve Bould and then was a huge admirer of Thierry Henry, Patrick Vieira and that Invincibles side.

And I think Arsenal are heading back in the right direction under Mikel Arteta.

Back in 2017, when I was part of the Watford side who beat Arsenal 2-1 at Vicarage Road, I made some criticisms in a post-match TV interview. 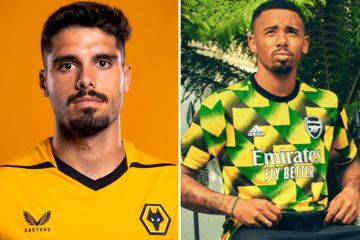 The comment about lacking ‘cojones, a bit of nuts’ was seized upon. I still get reminded of it almost every day.

What I was trying to get at was that, during Arsene Wenger’s latter years, when you played for a Premier League club outside of the ‘elite’, you felt as though you had a serious chance against Arsenal.

They would always try to pass it out from the back and you knew you could press them high and get some success.

It was all those aspects, rather than just lacking guts, that made Arsenal beatable.

But if I was playing for a smaller Premier League club now, I wouldn’t be feeling the same about facing Arteta’s Arsenal. They are far more united and far better organised.

It feels as if they are a proper unit and, after 2½ years, they are truly Arteta’s team.

After three successive wins at the start of the new season, they are looking as good as they have in years.

The signings of Gabriel Jesus and Oleksandr Zinchenko are excellent ones.

And the introduction of William Saliba into the first team — after the centre-back was loaned to Nice last season — has really improved them defensively.

I like the way Arteta has made tough calls in moving on players like Pierre-Emerick Aubameyang, Alex Lacazette and Nicolas Pepe and shaped a team who really believe in his methods.

Late last season, Arsenal collapsed in defeats at Tottenham and Newcastle and Spurs pipped them to fourth place and the final Champions League spot.

But I think that might be a blessing in disguise.

Had they made it, Champions League football would probably have arrived a year too soon.

My missus has been glued to the Amazon Prime ‘All Or Nothing’ documentary about Arsenal last season and it’s easy to forget what a tough start to the campaign they endured — losing their first three games and then Aubameyang being stripped of the captaincy.

So to finish fifth was a decent effort and they are capable of improving. Though it will still be tough to get above Spurs, Chelsea or Liverpool and into that top four this campaign.

Arsenal are fully expected to win today’s home match against Fulham and I expect them to win, too.

But it is a great test for them. Win and it’s four out of four. Drop points and people will say ‘typical Arsenal’.

Fulham have started the season well under Marco Silva and they are unbeaten in the league. In Aleksandar Mitrovic, they have a centre-forward who will work Arsenal’s back four like few others will be able to in the top flight.

I have the same nutritionist as Mitro — an excellent guy called Scott Robinson, who works with a lot of leading boxers.

So I know Mitro takes his diet and lifestyle very seriously. He is dedicated to his craft.

He looks leaner, he is getting around the pitch brilliantly and his link-up play is excellent.

The Serb will get 12 to 15 goals this season and keep Fulham up.

But Arsenal also have a greater goal threat now. The signing of Jesus from Manchester City during the summer makes so much sense for player and club.

At 25, Jesus is fully mature now. He is thriving on the responsibility of being the main man at Arsenal, playing every week as a centre-forward.

Whereas at City, the Brazilian was just one of a talented squad of forward players, often playing wide or on the bench.

Arsenal have youth and energy, they have those ball carriers who can get them up the pitch — players like Bukayo Saka, Martin Odegaard, Zinchenko and Ben White, too.

They also look to have greater team spirit — ‘cojones’ if you must.

So there you go, Alisha and every other Arsenal fan, I can say nice things about your team and I certainly don’t hate them!