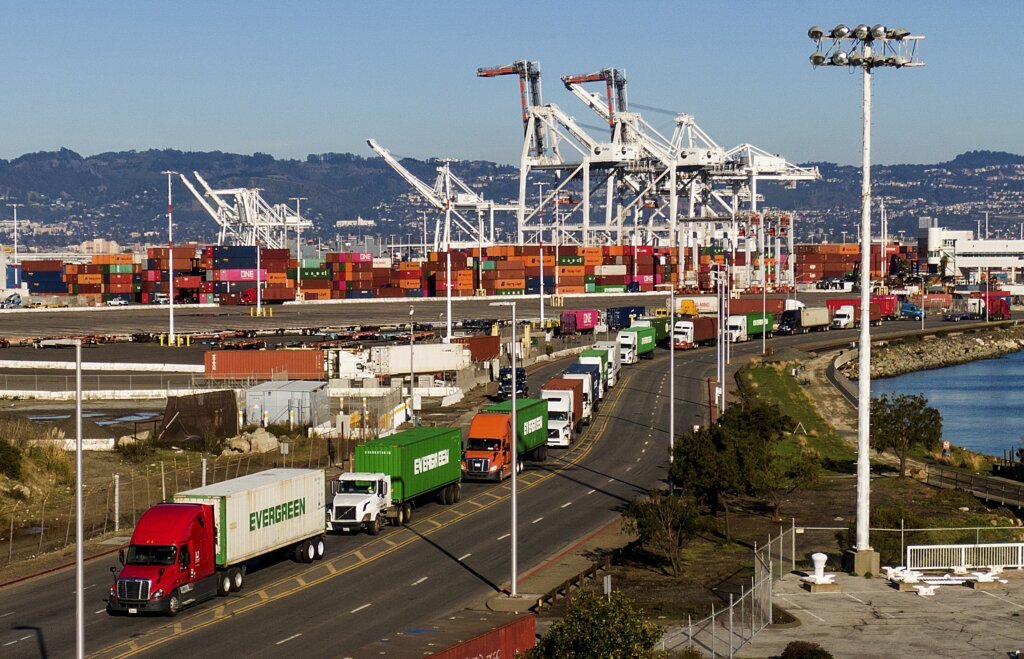 OAKLAND, Calif. (AP) — Truckers protesting a state labor law have effectively shut down cargo operations at the Port of…

OAKLAND, Calif. (AP) — Truckers protesting a state labor law have effectively shut down cargo operations at the Port of Oakland, it was announced Wednesday.

“The shutdown will further exacerbate the congestion of containers” and port officials are urging operations at shipping terminals to resume, a port statement said.

The protest that began Monday involves hundreds of independent big-rig truckers that have blocked the movement of cargo in and out of terminals at the port, which is one of the 10 busiest container ports in the country, according to its website.

There was no immediate word on when the protest might end but it’s exacerbating supply-chain issues that already have led to cargo ship traffic jams at major ports and stockpiled goods on the dock.

The protest comes as toymakers and other industries enter their peak season for imports as retailers stockpile goods for the fall holidays and back-to-school items.

The truckers are protesting Assembly Bill 5, a gig economy law passed in 2019 that made it harder for companies to classify workers as independent contractors instead of employees, who are entitled to minimum wage and benefits such as workers compensation, overtime and sick pay.

A federal appeals court ruled last year that law applies to some 70,000 truck drivers who can be classified as employees of companies that hire them instead of independent contractors.

The International Brotherhood of Teamsters called it a “massive victory” for exploited truckers. But the California Trucking Association, which sued over the law, had argued the law could make it harder for independent drivers who own their own trucks and operate on their own hours to make a living by forcing them to be classified as employees.

The legal battle stalled enforcement of the law but last month the U.S. Supreme Court recently decided it wouldn’t review the decision.

Truckers are now asking Gov. Gavin Newsom to meet and discuss the issue.

Meanwhile, there’s been no word on when the state might begin enforcing the law, which is still being contested in lower courts.

The director of the business and economic development office, Dee Dee Myers, emailed CNBC that “it’s time to move forward, comply with the law and work together to create a fairer and more sustainable industry for all.”

Ports already have been struggling to handle container traffic, much of it from Asia. After the COVID-19 pandemic began to take hold in 2020, cargo traffic to ports slumped drastically. But then it recovered and has been booming since.

“We understand the frustration expressed by the protestors at California ports,” Port of Oakland Executive Director Danny Wan said in the port statement. “But, prolonged stoppage of port operations in California for any reason will damage all the businesses operating at the ports and cause California ports to further suffer market share losses to competing ports.”

While the port handles many different types of cargo, it is an important distribution point for California’s agricultural products.

“The supply chain already is in crisis. This is a huge disruption,” Peter Friedmann, executive director of the Agriculture Transportation Coalition told the Wall Street Journal.