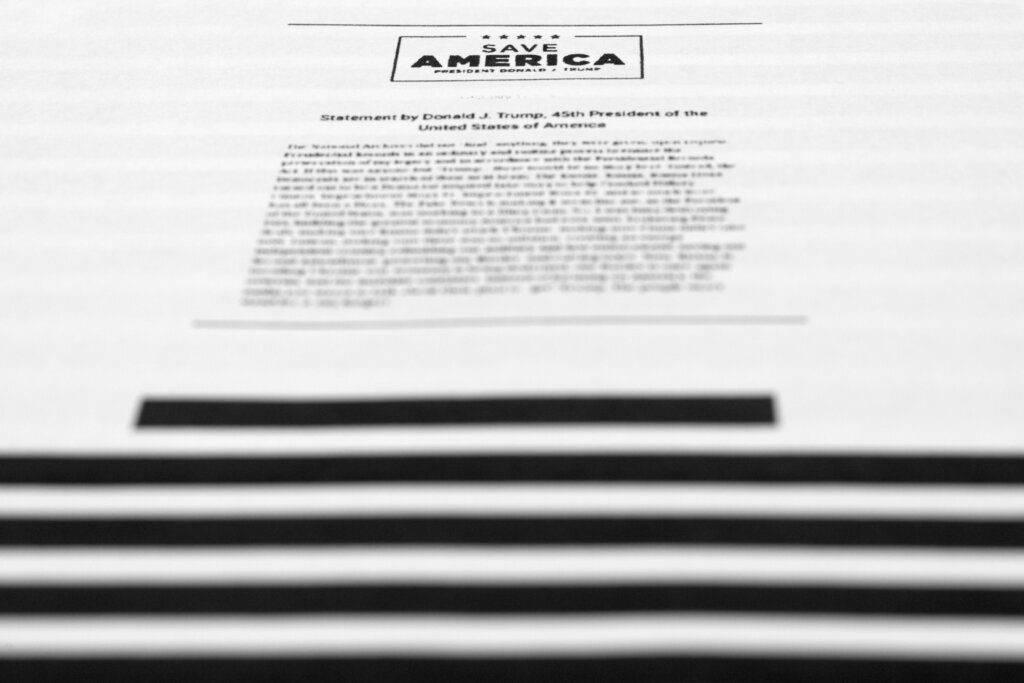 WASHINGTON (AP) — Sitting on top of more than $115 million across several political committees, Donald Trump has positioned himself…

WASHINGTON (AP) — Sitting on top of more than $115 million across several political committees, Donald Trump has positioned himself as a uniquely indomitable force in the GOP who would almost certainly have the resources to swamp his rivals if he launched another presidential campaign.

But that massive pile of money is also emerging as a potential vulnerability. His chief fundraising vehicle, Save America PAC, is under new legal scrutiny after the Justice Department issued a round of grand jury subpoenas that sought information about the political action committee’s fundraising practices.

The scope of the probe is unclear. Grand jury subpoenas and search warrants issued by the Justice Department in recent days were related to numerous topics, including Trump’s PAC, according to people familiar with the matter who requested anonymity to discuss an ongoing investigation. The subpoenas seek records as well as testimony and ask at least some of the recipients about their knowledge of efforts to engage in election fraud, according to one of the people.

The subpoenas also ask for records of communication with Trump-allied lawyers who supported efforts to overturn the election results and plotted to line up fake electors in battleground states. A particular area of focus appears to be on the “Save America Rally” that preceded the Jan. 6, 2021, insurrection at the U.S. Capitol, the person said.

The investigation is one of several criminal probes Trump currently faces, including scrutiny of how documents with classified markings wound up at the former president’s Mar-a-Lago club. Regardless of Save America’s ultimate role in the investigations, the flurry of developments has drawn attention to the PAC’s management, how it has raised money and where those funds have been directed.

Trump spokesman Taylor Budowich slammed the subpoenas, saying a “weaponized and politicized Justice Department” was “casting a blind net to intimidate and silence Republicans who are fighting for his America First agenda.” Representatives for the Justice Department have declined to comment.

While Trump has more than $115 million held across various committees, the vast majority of it is stored at Save America. The PAC ended July with more than $99 million cash-on-hand, according to fundraising records — more than the Republican and Democratic national campaign committees combined.

Trump has continued to shovel up small-dollar donations in the months since, frustrating other Republicans who have been struggling to raise money ahead of the November midterm elections.

Save America is set up as a “leadership PAC” designed to allow political figures to fundraise for other campaigns. But the groups are often used by would-be candidates to fund political travel, polling and staff as they “test the waters” ahead of potential presidential runs. The accounts can also be used to contribute money to other candidates and party organizations, helping would-be candidates build political capital.

Much of the money Trump has amassed was raised in the days and weeks after the 2020 election. That’s when Trump supporters were bombarded with a nonstop stream of emails and texts, many containing all-caps lettering and blatant lies about a stolen 2020 election, soliciting cash for an “election defense fund.”

But no such fund ever existed. Instead, Trump has dedicated the money to other uses. He’s financed dozens of rallies, paid staff and used the money to travel as he’s teased an expected 2024 presidential run.

Other expenses have been more unusual. There was the $1 million donated last year to the Conservative Partnership Institute, a nonprofit that employs Cleta Mitchell and former Trump chief of staff Mark Meadows, both of whom encouraged Trump’s failed attempt to overturn the 2020 election.

There was the $650,000 “charitable contribution” in July to the Smithsonian Institution to help fund portraits of Trump and the former first lady that will one day hang in the National Portrait Gallery, according to the Smithsonian spokesperson Linda St. Thomas.

Much of the money has also funded a different sort of defense fund — one that has paid the legal expenses of Trump confidants and aides who have been called to testify before the Jan. 6 committee.

Overall, Trump’s sprawling political operation has spent at least $8 million on “legal consulting” and “legal expenses” to at least 40 law firms since the insurrection, according to an analysis of campaign finance disclosures.

It’s unclear how much of that money went to legal fees for staffers after a congressional committee started investigating the origins of the attack. But at least $1.1 million has been paid to Elections LLC, a firm started by former Trump White House ethics lawyer Stefan Passantino, according to campaign finance and business records. An additional $1 million was paid to a legal trust housed at the same address as Passantino’s firm. Passantino did not respond to a request for comment Monday night. Payments have also been made to firms that specialize in environmental regulation and real estate matters.

As of July, only about $750,000 had been doled out to candidates for Congress, with an additional $150,000 given to candidates for state office, records show. Trump is expected to ramp up his political spending now that general-election season has entered full swing, though it remains unclear exactly how much the notoriously thrifty former president will ultimately agree to spend.

Trump has long played coy about his 2024 plans, saying a formal announcement would trigger campaign finance rules that would, in part, force him to create a new campaign committee that would be bound by strict fundraising limits.

In the meantime, Trump aides have been discussing the prospect of creating a new super PAC or repurposing one that already exists as gets he closer to an expected announcement. While Trump could not use Save America to fund campaign activity after launching a run, aides have discussed the possibility of moving at least some of that money into a super PAC, according to people familiar with the talks.

Campaign finance experts are mixed on the legality of such a move. Some, like Richard Briffault, a professor at Columbia Law School and an expert in campaign finance, said he didn’t see a problem.

“There may be some hoops he has to jump through,” he said. But “I don’t see a problem with it going from one PAC to another … I don’t see what would block it.”

“It is illegal for a candidate to transfer a significant amount of money from a leadership PAC to a super PAC. You certainly can’t do $100 million,” said Adav Noti, a former Federal Election Commission attorney who now works for the Campaign Legal Center, a Washington-based good governance group focused on money and politics.

And whether or not Trump would face any consequences is a different matter.

For years, the FEC, which polices campaign finance laws, has been gridlocked. The commission is split evenly between Republicans and Democrats, and a majority vote is needed to take any enforcement action against a candidate.

More than 50 separate complaints alleging Trump broke campaign finance laws have been filed against him since his 2016 campaign. In roughly half of those instances, FEC lawyers have concluded that there was reason to believe that he may have broken the law. But the commission, which now includes three Trump-appointed Republicans, has repeatedly deadlocked.

The list of dismissed complaints against Trump is extensive. In 2021, Republicans on the commission rejected the claim, supported by the FEC’s staff attorneys, that a Trump orchestrated hush-money payment by his former lawyer to pornographic film star Stormy Daniels amounted to an unreported in-kind contribution. In May, the commission similarly deadlocked over whether his campaign broke the law by hiding how it was spending cash during the 2020 campaign.

And over the summer, the commission rejected complaints stemming from Trump’s threat to withhold $391 million in aid for the Ukraine unless the Ukrainian officials opened an investigation into the relationship President Joe Biden’s son Hunter Biden had with a Ukrainian gas company called Burisma, which the FEC’s attorney’s determined was a potential violation of campaign finance law.

“There is no legal basis whatsoever for believing that Congress intended the FEC to police official acts of the government that may be intended to assist an officeholder’s reelection,” the commission’s three Republicans said in a written statement late last month.

That means any enforcement action would likely have to come from the Justice Department.

“He has nothing to fear from the Federal Election Commission until either its structure is changed or there is turnover among the FEC Commissioners,” said Brett G. Kappel, a longtime campaign finance attorney who works at the Washington-based firm Harmon Curran and has represented both Republicans and Democrats. “That doesn’t mean he doesn’t have anything to fear from the Justice Department, which is already apparently investigating Save America. From what I can see, there are multiple wire fraud allegations that could be the subject of a Justice Department investigation.”

In the meantime, Trump and Save America continue to rake in contributions from grassroots supporters, blasting out fundraising solicitations with aggressive demands like “this needs to be taken care of NOW” and threatening donors that their “Voter Verification” canvass surveys are “OUT OF DATE,” even as some of the Republican Senate contenders Trump endorsed and helped drag across the finish line in primaries are struggling to raise cash.

Senate Minority Leader Mitch McConnell, R-Ky., has urged those candidates to ask Trump for money, which the former president has so far proven reluctant to provide. That has left the candidates, some of whom presented themselves as McConnell antagonists during their primaries, to grovel to McConnell and the Senate Leadership Fund, the super PAC he controls and has $100 million in reserve.

It also strengthens McConnell’s hand in his long-simmering feud with Trump, who has urged GOP senators to oust the Kentucky Republican. Some close to Trump acknowledge the candidates could use the money, but said he doesn’t see it as his responsibility to fill the void.

BJP’s march to Bengal secretariat: Suvendu arrested much ahead of Nabanna