Tyson Fury is NOT biggest draw in boxing with Anthony Joshua still ahead of him despite two losses, claims Eddie Hearn

TYSON FURY is still behind Anthony Joshua when it comes to being a boxing powerhouse.

The Gypsy King has become a household name across the globe thanks to his epic trilogy with American knockout artist Deontay Wilder.

Fury, 33, sold a record 94,000 tickets for his final defence of the WBC heavyweight title against Dillian Whyte in April – but promoter Eddie Hearn insists the Wythenshawe warrior isn’t top dog in the sport.

“But I am loyal to AJ, and I think Fury knew that when I was discussing signing him when he was 400lbs.

“But you never know what could happen in the future.” 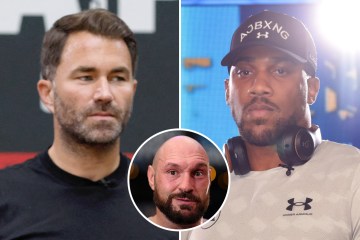 The pay-per-view numbers generated by the British rivals would suggest Hearn is indeed correct.

Only ONE of Fury’s six pay-per-view bouts prior to his clash with Whyte generated over a million buys.

Joshua, in comparison, has raked in well over a million buys in SEVEN of his ten pay-per-view outinga.

Fury is currently enjoying his retirement from boxing, which he announced after his brutal sixth-round knockout of Whyte,

Joshua, meanwhile, is gearing up for a high-stakes rematch with Oleksandr Usyk – whom he’ll face in Saudi a fortnight on Saturday.

AJ has kept to himself since his ill-fated clash with the undefeated Ukrainian, who put on a boxing masterclass in their Tottenham tussle last September.

Hearn said: “There’s a lot of pressure in AJ’s world. I feel like he’s lived in this bubble for a long time. AJ doesn’t go out, really.

“He trains. He goes back to one of his houses. He sees his mates, does a bit of motocross, plays a bit of FIFA. But that’s it.

“When you live in that world and you suffer defeat, it’s very lonely. Everyone turns on you.

“The adulation that you received from the public turns to, ‘Oh you lost mate, you ain’t actually that good, you’re useless.’ And I feel that he’s a very proud man.”

Atlético Madrid leads the list of title challengers in Spain