TYSON FURY has been named the best boxer of the year for the second time at ESPN’s prestigious ESPY awards.

The Gypsy King – who retained his WBC heavyweight title with a brutal knockout of Dillian Whyte in April – won the ESPY for Best Boxer of 2021 at the sports network’s annual ceremony in Los Angeles on Wednesday.

Fury, however, wasn’t present to collect the award as he’s twice been denied entry to the USA due to his relationship with alleged Irish mobster Daniel Kinahan.

Boxing fans were quick to comment on the Brit’s latest accolade, with one saying: “Well deserved!!!!’”

And another said: “Best in the world.” 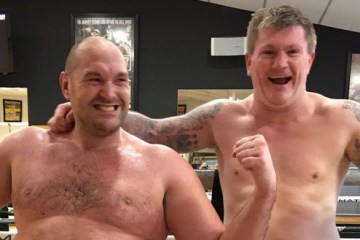 One remarked: “Simply the best.”

Another chimed in: “Well done fury best HW by a country mile, and he’s British too so that makes it soooo much better. The king is back.”

However, not all boxing fans agreed with Fury’s scooping of the award, with one saying: “That’s insane.

“No disrespect to fury but u got fighters like Jermell [Charlo] and Devin [Haney who legit went undisputed this year.”

Another said: “What the hell? Man, what is wrong with this sport.”

Dr. Ironfist – who now serves as Mayor of Kiev – received the Arthur Ashe Award for Courage for his role in helping defend Ukraine from the ongoing Russian invasion.

Klitschko spoke via video message and said: “It is a great honour for me to receive this award.

“I am convinced that this is a recognition of the courage and inviolability of the Ukrainian people, who have been bravely resisting the Russian aggressor.

“This is an award for everyone who defends the independence and freedom of Ukraine.”

Fury, 33, is currently enjoying his retirement from boxing – which he announced after his brutal stoppage of Whyte at Wembley.

But he recently revealed he’s willing to lace up the gloves again for a blockbuster Battle of Britain with Anthony Joshua.