The Gyspy King has told pals the “wall of silence” coming from AJ indicates he already has the upper hand.

An insider close to the Fury camp said: “So far AJ has allowed his management team to do all the talking.

“In contrast, Tyson has been front and centre pushing for this contest and taking the fight directly to Joshua.

“Tyson thinks this says it all and that he already has the upper hand and that he has AJ on the run.

“He is determined to boss things in and out of the ring from here until fight night.” 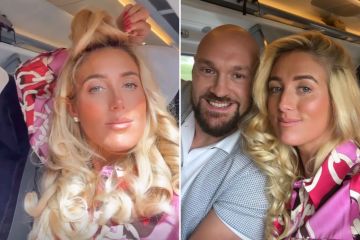 Tyson goaded AJ a few weeks ago after offering him an unexpected way back to the big time.

“To clarify, there has never been a December 17 date, ever.

“There has only been November 26 at Wembley or December 3 in Cardiff.

“This is it AJ, don’t get scared now.

“Agree to the fight and let’s give the fans what they want.

The contract for the fight has since been signed by Joshua’s team as they confirmed the 60/40 split and December 3 date.

Yesterday we told how Fury is vowing to win his fight against AJ “nice and early”.

When will Tyson Fury vs Anthony Joshua take place? All you need to know on blockbuster bout

“Tyson wants to leave with a win and win in style,” a source close to the Gypsy King said.

“He wants to leave no one in doubt who is the better fighter.

“He wants an early KO to put the whole debate about who is the better fighter to bed once and for all.”

Despite having everything to lose, Tyson has also told pals he feels “zero pressure”.

Our source added: “Tyson isn’t nervous. Why would he be? He knows he has all the tools to dismantle Joshua and he plans to demonstrate that.”

Tyson’s vow comes days after Fury’s US promoter Bob Arum warned Joshua he faces a “massacre” if he accepts the challenge of the all-British clash.