BOXING superstar Tyson Fury has dipped into his pocket to sponsor his local football team.

The retired WBC heavyweight champion, 33, has struck a partnership with League One side Morecambe FC.

Fury’s ‘Gypsy King’ brand will be embroidered on The Shrimps’ home and away shorts for the upcoming 2022-23 season.

The club announced the deal via a Twitter video featuring an enthusiastic Fury, who is originally from Wythenshawe but has made Morecambe his home over the last few years.

“Let’s have a fantastic season and smash it. Come on the boys! And the girls!” 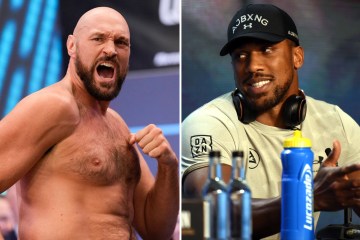 Boxing and Morecambe fans were quick to comment, with one saying: “Great to see! Putting something back into his local club.”

Another said: “Another reason to love this man.”

One chimed in: “Love it, you big stiff idiot.”

Morecambe’s Head Of Commercial Martin Thomas is thrilled with the partnership the club has reached with Fury,

He said: “Tyson is a fantastic ambassador for the Morecambe area and it’s fantastic to have him on board.

“Tyson is one of the most recognisable names in the world of sport, and will bring worldwide recognition to the club.”

Fury is currently enjoying his retirement from boxing, which he announced after his brutal knockout of Dillian Whyte at Wembley in April.

But he recently performed a dramatic U-turn, saying: “This is reconfirmation on what I’ve said about fighting Anthony Joshua for f*** all in England.

“That’s how the fight happens, I’ll sign the contract today. The fight’s got to be for free. Free-to-air television and all tickets go for free.

“No money is to be made out of this British historic fight if it happens.

“There’s the terms, I’m in the driving street. Take it of effing leave it. The ball is in your court guys, take it or leave it either way I don’t give a damn.

“There’s the offer. Peace out.”

Droupadi Murmu: Once a councillor and now India’s president-elect