Tyson Fury ‘trying to stay relevant’ and is NOT retired amid talk of facing winner of Joshua v Usyk, says AJ promoter

TYSON FURY has been accused of “trying to stay relevant” after backtracking on his boxing comeback.

The Gypsy King announced he was returning for an unlikely trilogy bout with Derek Chisora, despite his 2011 and 2014 wins.

But then just two days later, on his 34th birthday, Fury said he was retiring for good.

It all came as the build up for Anthony Joshua’s rematch with Oleksandr Usyk on Saturday in Saudi Arabia intensified.

Smith told The Mirror: “It is not the first time he has retired but we will see. 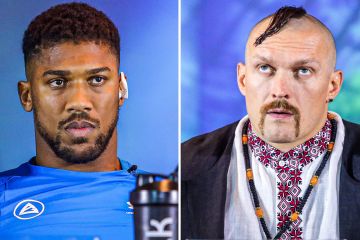 “One thing I would say is that he is the WBC champion, if he actually has retired he should have to vacate his belt.

“I don’t think he should be rushing because he has his time that he doesn’t have to fight mandatories.

“But if he is retired the belt is something that the WBC need to look at it.

“But how many times has this bloke retired and come back. He will probably be fighting Thor Bjornsson next week.”

Fury first retired in April after knocking out Dillian Whyte, 34, at Wembley Stadium.

But he has been linked with returning to challenge the winner between Usyk, 35, and Joshua, 32.

Despite that, Fury instead called out Chisora, 38, and former world’s strongest man Bjornsson, 34, who has had four boxing exhibitions.

The heavyweight star is still yet to vacate his WBC belt and has until August 26 to confirm in writing whether he plans to fight again.

If he does, a first ever four-belt heavyweight undisputed bout awaits, something Fury’s US promoter Bob Arum is ready to negotiate.

Arum said to Sky Sports: “It’s really the only fight that makes sense for Tyson Fury.

“I’ve discussed this with my co-promoter of Fury, Frank Warren, and once this fight is over we’re going to put together a total unification match between the winner and Tyson Fury.

“Now, if Usyk wins the fight, which I expect, that will be quite easy to do because we’re very close to the Usyk people as they’re the same people who manage Vasiliy Lomachenko who fights for us.

“If Joshua wins, Eddie Hearn is his promoter. We’ve talked many times with Hearn about various matches and I’m sure we’ll be able to come together on this one.”

After exodus of stars, No. 23 Cincinnati tries to reload