TYSON FURY’S blockbuster showdown with Anthony Joshua is at risk of collapse after Eddie Hearn revealed AJ’s camp will not sign the contract by tomorrow’s deadline.

The British heavyweight duo looked set for one of the biggest fights in boxing history.

Fury called out AJ and an agreement was in place for the pair to step into the ring in Cardiff on December 3.

However, the finer details of the paperwork are yet to be finalised meaning nothing has been signed.

Fury handed Joshua an ultimatum on Saturday night, telling him to put pen to paper by Monday or else he will be “moving on”.

The Gypsy King said: “I was optimistic about three weeks ago but it shouldn’t be taking this long to sign a contract. 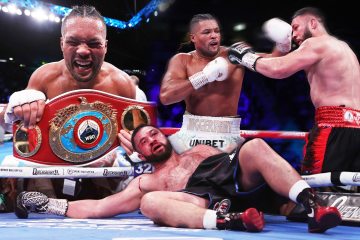 “I’m not waiting around for some guy who has lost three of his last five fights.”

But Joshua’s promoter Hearn hit back at Fury’s comments by standing his ground.

The Matchroom chief said: “Look Tyson Fury has no intention of taking this fight if that’s the route he’s going to take.

“And now Tyson Fury is saying, ‘I’m walking away from the fight if you don’t sign on Monday.’

“Well guess what? We ain’t signing on Monday because we are having a meeting on Monday to discuss numerous points within the contract.”

Fury – who was ringside as Joe Joyce knocked out Joseph Parker – has his fights broadcast on BT Sport and ESPN in America but AJ recently penned an exclusive deal with streaming app DAZN.

The TV channel remains one of the final stumbling blocks that could potentially scupper the fight but both sides are willing to negotiate a plan.

But Fury insists his rival Joshua, who suffered a second successive defeat to Oleksandr Usyk on August 20, is in no position to make demands.

The Morecambe giant also laughed off Usyk’s suggestion that the Brit is trying to duck out of their four-belt decider.

A £125million offer from Saudi Arabia was on the table but on the condition the bout happened on December 17, to upstage rival neighbour Qatar’s World Cup Final on the 18th.

But Usyk refused to rush into another training camp – especially with his country still being invaded by Russia – and has ruled himself out until 2023.