JOHN FURY has offered to fight Eddie Hearn for FREE if Anthony Joshua signs a deal with his son Tyson.

The heavyweight stars are still in talks for a December 3 Battle of Britain at Cardiff’s Principality Stadium.

AJ has had the contract for almost two weeks with broadcasters DAZN, BT Sport and ESPN also thrashing out a network deal.

But Hearn insisted the paperwork is not yet ready to be signed as they go through the finer terms and conditions.

So Fury’s dad is willing to do whatever it takes to get an agreement over the line – even if that means getting in a fight himself.

He told the Daily Mail, via Free Bets: “Whatever they say they can have. I will fight Eddie Hearn on the undercard if they want that as well. 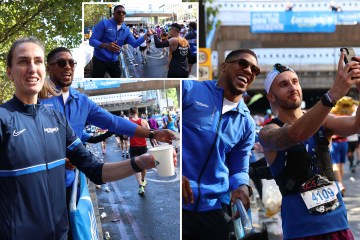 “I will fight AJ’s promoter on the undercard. I will do that for free.

“If they sign the contract today I will box Eddie Hearn on the undercard for free. OK?”

Usyk was in line to unify his belts against Fury, 34, but the Ukrainian ruled himself out until next year to recover from injuries.

That caused AJ to receive a surprise WBC title fight offer after accepting to concede a 60/40 financial split.

But John still doubts that Joshua truly wants to face his son, having failed to return the contract.

He said: “I think Joshua’s sort of like getting doubts about fighting the Gypsy King.

“You know they’ve had that contract now, for well over a month. Nothing’s happened.

“But what they want, you see, is a to and fro for next two years or twelve months.

“Twelve months or two years back and forth, like they did with Deontay Wilder.

“We don’t want that. Tyson’s capped it off and put a deadline on it as he wants it signed up.

“He wants to get in camp, and then get it under way. Get the fight on and give the fans what they want. We aren’t interested in back and fros.”