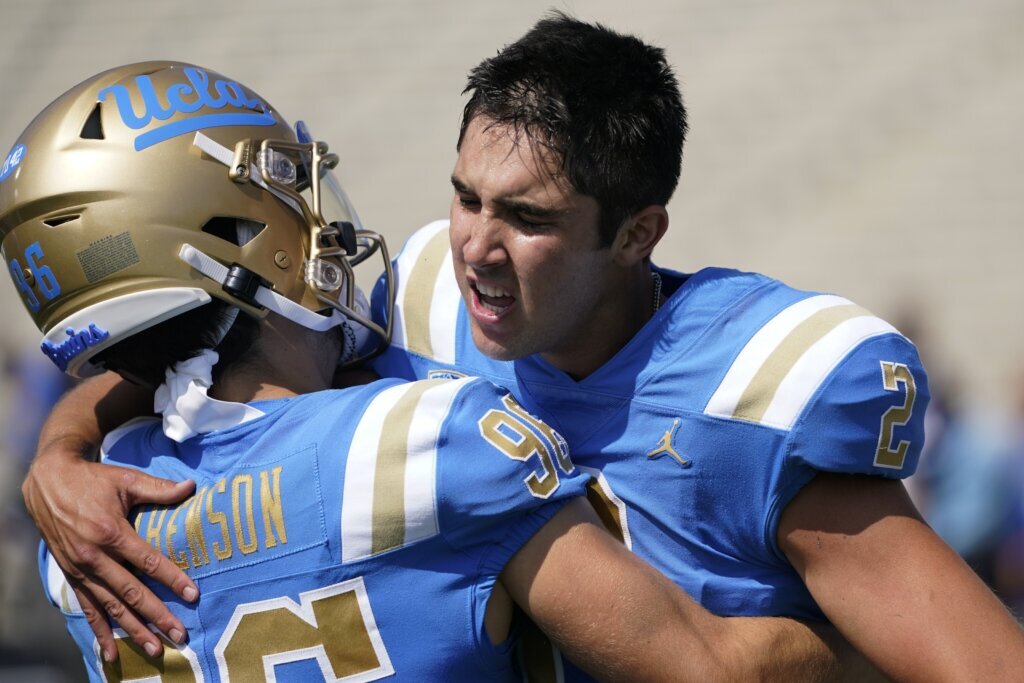 PASADENA, Calif. (AP) — Nicholas Barr-Mira kicked a 24-yard field goal on the final play of the game and UCLA…

The Jaguars looked to be in control of becoming the fourth Sun Belt Conference team in two weeks to beat a Power Five team, but were done in when a trick play went awry. The Jaguars tried a fake field goal with 2:52 remaining but Tanner McGee was sacked by Carl Jones Jr., giving the Bruins the ball at the 33.

Dorian Thompson-Robinson completed 20 of 30 passes for 263 yards and three touchdowns as the Bruins start 3-0 for the first time since 2015.

La’Damian Webb rushed for 124 yards and a touchdown and Carter Bradley passed for 237 yards and two scores for South Alabama (2-1), which was looking to join Marshall, Appalachian State and Georgia Southern in the Sun Belt’s hit parade. Last Saturday, Marshall and Appalachian State posted upsets against ranked teams Notre Dame and Texas A&M and Georgia Southern’s win over Nebraska got Scott Frost fired.

Webb and Bradley transferred to South Alabama this season. Webb, who spent the past two seasons at Jones Community College in Mississippi, had his first 100-yard game.

South Alabama led 20-17 at halftime, but UCLA took its first lead on the opening drive of the second half when Thompson-Robinson connected with Kam Brown for an 11-yard touchdown. Barr-Mira’s 28-yard field goal extended the lead to 23-17 before South Alabama responded.

Marco Lee’s 1-yard run up the middle for his second TD put the Jaguars up by one with 1:43 remaining in the third. South Alabama got the ball back when Thompson-Robinson fumbled on the first play of the ensuing drive and it was recovered by Ed Smith IV at the UCLA 6. Two plays later, Lacy’s score extended the Jaguars lead to eight.

UCLA appeared to take a 12-10 lead early in the second quarter when Zach Charbonnet scored on a 7-yard pass from Thompson-Robinson, but the call was reversed when instant replay showed Charbonnet was stopped short of the goal line.

On the ensuing play, South Alabama outside linebacker CJ Rias forced Charbonnet to fumble at the 2-yard line and Zeke Chapman recovered it in the end zone.

South Alabama: The Jaguars drop to 1-11 against Power Five teams since moving up to the Football Bowl Subdivision in 2013. Their lone victory was against Mississippi State to open the 2016 season.

UCLA: Not many people viewed the Bruins’ escape. The game drew 29,344, the second-worst crowd since they moved to the stadium in 1982.