CONOR MCGREGOR has renewed his war of words with social media sensation Hasbulla – by challenging him to a sparring match.

The UFC’s poster boy took aim at Hasbulla on social media earlier this month – branding him a “g**p” – after seeing the TikTok superstar call his pet chicken his nickname.

McGregor quickly deleted his verbal tirade against the 19-year-old, who suffers from genetic Growth Hormone deficiency.

But The Notorious put the Russian back in his sights early on Thursday, tweeting: “Let me spar Hasbulla UFC. Big gloves and a friendly affair I swear.”

It didn’t take long for Hasbulla – who hails from the same part of Russia as McGregor’s bitter rival Khabib Nurmagomedov – to respond to the now-deleted tweet.

He tweeted: “This is what I’ve been waiting for, as usual it’s deleted. Conor McGregor, just @ me and leave the tweet up.” 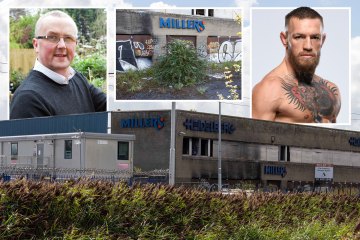 Hasbulla’s followers were quick to comment on his trolling of McGregor, with one saying: “I dont think Connor would want that smoke.

“Money on Hasbi for sure.”

Another said: “Connor McChicken finally responds. But doesnt matter, he is got no chances anyway.”

And another said: “As always …Hasbulla SAVAGE.”

Another chimed in: “You will smash @TheNotoriousMMA same as @TeamKhabib.”

McGregor, 34, is currently in the final stages of recovering from the horrific broken leg he suffered in his trilogy fight with Dustin Poirier last July.

The MMA superstar – who is currently filming a Road House remake with Jake Gyllenhaal – was expected to return to the octagon in the autumn but is not back to 100 per cent.

A return to the octagon early next year is on the cards, according to his manager Tim Simpson.

He recently told MMA Junkie: “Acting wasn’t something I think Conor had at the very front of his mind, right now he’s still a world-class athlete and his focus is being the best fighter in the world.

“It’s a great opportunity to do a big Hollywood blockbuster in meantime and he’s going to kill it.

“He’s still on track for a big return next year, but this fits in perfectly in the meantime.

“The leg is still healing, I think there’s a little bit more to go on that but he’s been training like a madman. Twice a day, every day.

“He’s been training super hard, he’s in amazing shape it’s just the final adjustments to get that leg where it’s supposed to be.”