UK inflation accelerated more than expected last month to the highest in 40 years, intensifying a squeeze on consumers and adding to pressure for action from the government and Bank of England.


The Consumer Prices Index rose 10.1% in July from a year earlier after a 9.4% gain the month before, the Office for National Statistics said Wednesday. The reading was higher than expected by both the BOE and private-sector economists. Rising food prices made the biggest contribution to the month’s increase, indicating inflationary pressures are spreading beyond energy. The pound briefly spiked to the day’s high of $1.2143 following the release, before paring gains.


Core inflation — excluding energy, food, alcohol and tobacco — accelerated to 6.2% from a year ago in July, more than the 5.9% reading that economists had expected. The figures add to a cost-of-living crisis, with wages falling further behind rising prices for goods and services of all kinds. The BOE expects inflation to top 13% in October when the energy price cap resets, and Governor Andrew Bailey has signaled he’s prepared to raise interest rates further. Investors are pricing in another 50 basis-point hike in September.


Contenders seeking to replace Boris Johnson as prime minister are promising further aid to those struggling to pay their bills.


“Rising inflation is really putting the squeeze on real wages, even with strong wage growth,” said Mike Bell, global market strategist at JP Morgan Asset Management. “And with the increase in energy bills coming in October, it’s only set to get worse.”


Economists are growing increasingly pessimistic about the UK, with the risk of a recession now seen as far more likely than not due to rising cost pressures. The BOE expects a recession to start in the fourth quarter, lasting into the early part of 2024.


The central bank expects inflation to surpass 13% later this year when regulators allow energy bills to rise again. That would mark the worst reading since September 1980, when Margaret Thatcher’s government struggled to bring a wage-price spiral under control.


Separate figures showed pipeline price pressures appeared to be easing, with fuel and raw material prices rising just 0.1% in July, the smallest monthly increase since December. That was mainly due to a drop in crude oil prices during the month. It still left input prices up 22.6% on the year, only slightly below the record pace recorded in June. 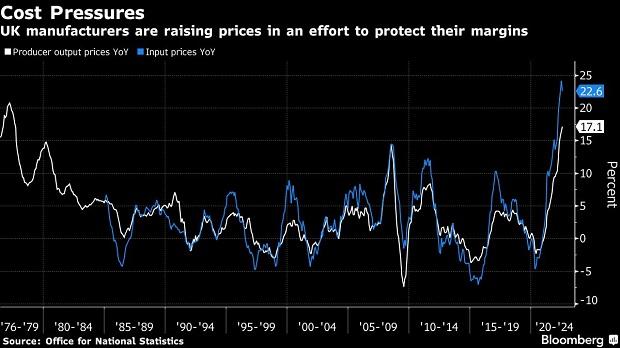 “The cost of both raw materials and goods leaving factories continued to rise, driven by the price of metals and food respectively,” Fitzner said.


Another measure of inflation used to set rail fares and payouts on index-linked government bonds registered the strongest jump since 1981. The Retail Prices Index increased rose 12.3% from a year ago, up from 11.9% the month before.


Bailey has blamed Russia for choking off supplies of natural gas, raising the cost of electricity across Europe, for the jump in inflation. Gas futures embedded in the BOE’s forecasts this month were almost double their level in May, and they’ve risen further in the past week. 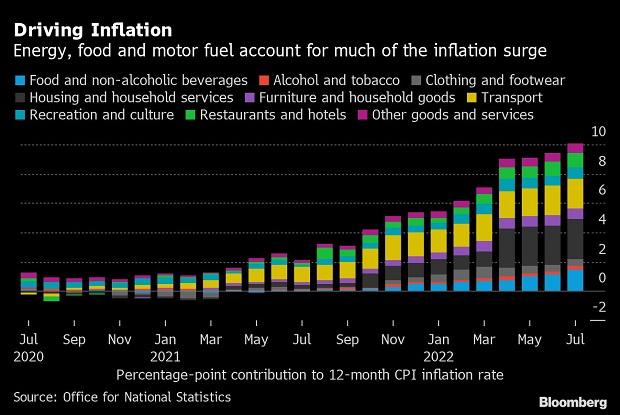 Those increases are feeding through into the cost of goods and services, prompting people across the country to demand higher wages. Railway workers plan another round of strikes this week, and teachers, barristers and nurses are considering action of their own.


Real wages adjusted for inflation fell 3% in three months though June, the sharpest pace since records began in 2001, a official data published Tuesday showed. Employment increased by 160,000 in the second quarter, 46% less than the three months through May, and job vacancies fell for the first time since August 2020.


“The cost-of-living crisis is now very real for both households and businesses, so there needs to be a concrete way forward to support vulnerable groups with higher energy bills,” said Alpesh Paleja, lead economist at the Confederation of British Industry.

York – free bets: Get £30 bonus to spend on horse racing at the Ebor festival this week with SBK

Go Fashion hits record high on healthy outlook; up 100% against…