Usyk, who beat Joshua last September, defends his belt against the British superstar on Saturday in Saudi Arabia.

On the same night in London, Kolesnyk faces Larissa Pacheco in the semi-final of this year’s Professional Fighters League.

The lightweight is one win away from the $1million winner-take-all finale fight.

Meanwhile, victory for Usyk over AJ again puts him in line for an undisputed title decider with Tyson Fury, 34.

Kolesnyk, 32, is backing her former amateur boxing team-mate all the way, but may have to record the fight before cheering him on. 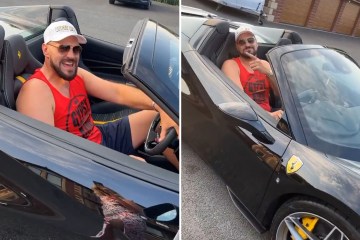 She told SunSport: “My fight is No6 or No7, so it will be close.

“Not sure if I’ll have the opportunity, but I’ll definitely watch his fight the next day.”

“I’m sure this fight will be interesting but there is no other option that Usyk winning this fight.

“I don’t see how Anthony Joshua can beat Usyk, but in another way it’s a boxing fight and anything can happen.

“But from my side, of course I wish the best to Oleksandr.”

Kolesnyk last year signed with the PFL, MMA’s only promotional with a league format.

Fighters have a two-bout regular season, where points are earned per method of victory.

The top four then progress to the play-offs, which is a semis and final with victors bagging the life-changing $1m (£827,000) cheque.

Last year, Kolesnyk lost twice but this season she progressed to the last four with wins over Abby Montes, 22, and Vanessa Melo, 34.

And she did so all while her country remains at war, leaving behind her loved ones.

Kolesnyk said: “It’s hard, I won’t hide it. What I can do is inspire some people from my country not to give up.

“It’s everything to me, it’s kept me focussed on the main goal, on the fight, so I’m really happy to be where I am now.”

Kolesnyk faces Pacheco, 27, at the Copper Box in a rematch of the fight she lost last year.