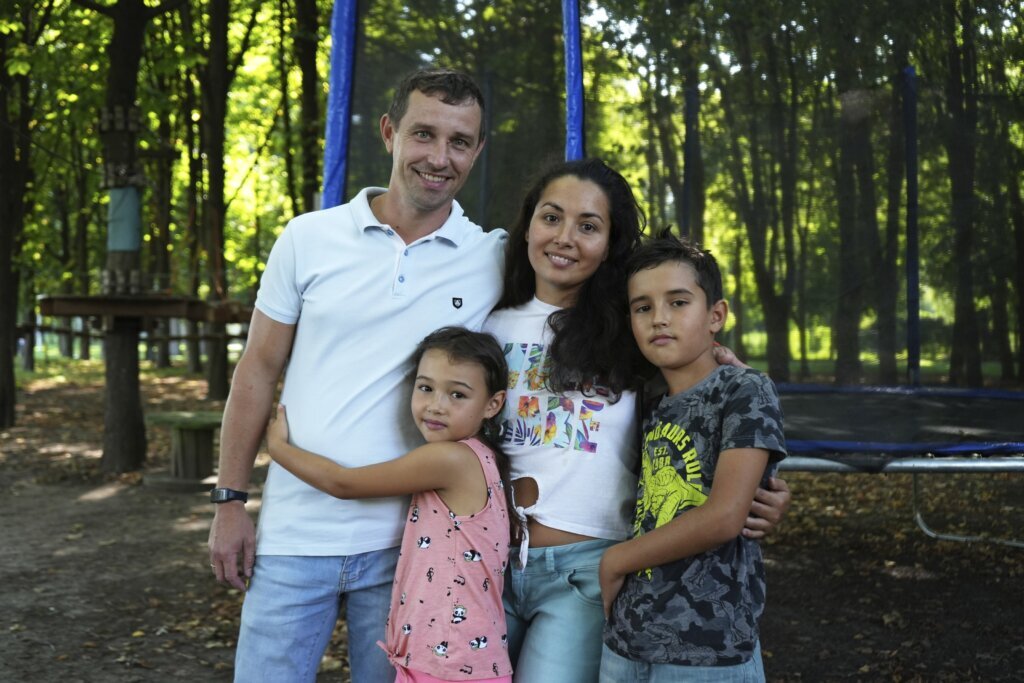 KYIV, Ukraine (AP) — It was early one morning when life under Russian occupation became too much for Volodymyr Zhdanov:…

KYIV, Ukraine (AP) — It was early one morning when life under Russian occupation became too much for Volodymyr Zhdanov: Rocket fire aimed at Ukrainian forces struck near his home in the city of Kherson, terrifying one of his two children.

His 8-year-old daughter “ran in panic to the basement. It was 2 o’clock in the morning and (she) was really scared,” said Zhdanov, who later fled the city on the Black Sea and has been living in Kyiv, the capital, for the past three weeks.

Kherson, located north of the Crimean Peninsula that was annexed by Moscow in 2014, was the first city to fall after Russia’s invasion on Feb. 24. The port remains at the heart of the conflict and Ukraine’s efforts to preserve its vital access to the sea. For Russia, Kherson is a key point along the land corridor from its border to the peninsula.

Zhdanov and others who made the hazardous journey to escape from the region describe increasingly grim conditions there, part of a heavy-handed effort by Russia to establish permanent control.

The streets in the city, which had a prewar population of about 300,000, are mostly deserted. Rumors swirl about acts of armed resistance and the sudden disappearance of officials who refuse to cooperate with the Russian authorities.

Occupation forces patrol in markets to warn those trying to use the Ukrainian currency, the hryvnia, in transactions. Pro-Moscow officials have been installed in local and regional governments, as well as on the police force. Workers at various municipal services face pressure to cooperate with Russian managers. Most schools have closed.

Supplies of essential goods are uneven, halting most commercial activity. There are shortages of medicines and spikes in the price of other commodities.

Many residents had been determined to hold out as long as possible for a promised Ukrainian counterattack that hasn’t materialized.

“There was physical danger in the city, because there were many soldiers,” Zhdanov said.

A referendum on the region becoming a part of Russia has been announced by Moscow-installed officials, although no date has been set. Meanwhile, officials are pressuring those remaining to take Russian citizenship.

Income from Zhdanov’s family flower business dried up after the currency change, although he kept growing plants anyway.

“It’s difficult to survive with no money and no food,” he said. “Who would want a Russian government if your life, business, and kids’ education are taken away from you? They’ve all gone.”

When he left Kherson with his family, Zhdanov risked arrest by hiding a Ukrainian flag in the bottom of his pack. He had kept the flag from a public protest of the Russian troop presence.

Journalist Yevhenia Virlych also stayed for five months and kept working, writing about officials who had allegedly cooperated with the Russians. But she worked while in hiding and feared for her safety, frequently changing apartments and posting photos of Poland on social media to give the impression she had already fled.

“They have tied a knot around Kherson and it’s getting tighter,” Virlych said, adding that locals are being pressured to accept Russian passports. “Russia, which came under the banner of liberation, but came to torture and take us captive. How can anyone live that way?”

Last month, Virlych finally fled to Kyiv with her husband.

Those wanting to leave Kherson must pass a series of Russian military checkpoints. Soldiers search belongings, identity papers and mobile phones, with anyone suspected of supporting the resistance facing interrogation at so-called filtration camps.

As Kherson sinks into poverty, it’s getting harder to leave. A bus ticket to Zaporizhzhia, a city 300 kilometers (185 miles) to the northeast, now costs the equivalent of $160. Before the war, it was $10.

Virlych said she admired the bravery of those who are staying behind as well as of those who risked their lives to join anti-Russian protests in the early stages of the occupation.

She recalled a major demonstration on March 5 attended by more than 7,000 people.

“In all my life, I’ve never seen people take such action,” she said.

By April, the protests had stopped as occupying troops began responding to them with lethal force, Virlych added, saying, “The Russians were opening fire (at crowds) and people were getting wounded.”

Moscow wants to maintain its hold on Kherson, which is strategically located near the North Crimean Canal that provides water to the Russian-occupied peninsula. Ukraine had shut down the canal after the annexation eight years ago, but the Russians reopened it after they took control of the region.

Like Zhdanov, Virlych is still holding out hope for a Ukrainian counteroffensive to wrest the region away from Russia.

“I believe only in God and the Ukrainian armed forces,” she said. “I no longer have faith in anything else.”

Follow the AP’s coverage of the war at https://apnews.com/hub/russia-ukraine and Hanna Arhirova at https://twitter.com/h_arhirova

Amid sanctions from the West, INSTC raises Russian trade volume with India