The Ukrainian president, 44, gushed with pride over his compatriot’s amazing triumph against a game AJ.

Usyk, 35, beat Joshua via split decision, surviving a ninth-round onslaught to wrestle back control of the bout.

Hoping to inspire the people of war-torn Ukraine, Zelensky tweeted: “Difficult, but so important and necessary VICTORY @usykaa!

“Defending the title of the world champion is a symbol of the fact that all Cossacks will not give up theirs, will fight for it and will definitely win!”

Usyk dedicated his victory to his compatriots, saying after the fight: “I did this victory for my country, for all people, militaries who are defending the country. Thank you very, very much. 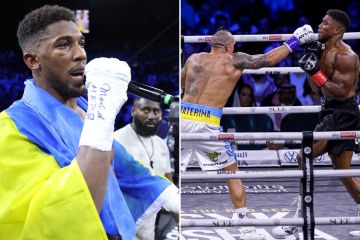 “This is already historic. Many generations are going to watch this fight, especially the round when someone tried to beat me hard, but I withstood it and turned it in a different way.”

On what’s next, Usyk added: “I’m sure that Tyson Fury is not retired yet.

“I’m sure, I’m convinced he wants to fight me.

After the bout, Joshua threw Usyk’s belts out of the ring, storming off before bizarrely returning and grabbing the mic.

Upon his return, AJ bellowed: “If you knew my story you would understand the passion.

“I ain’t no amateur boxer from five-years-old that was an elite prospect from youth.

“I was going to jail, I got bail and I started training my a*** off, I wanted to be able to fight.

“I’m stealing this Usyk I’m sorry, but it’s because of the passion we put into this.

“This guy to beat me tonight, maybe I could have done better, but it shows the level of hard work I put in so please give him a round of applause as our heavyweight champion of the world.”