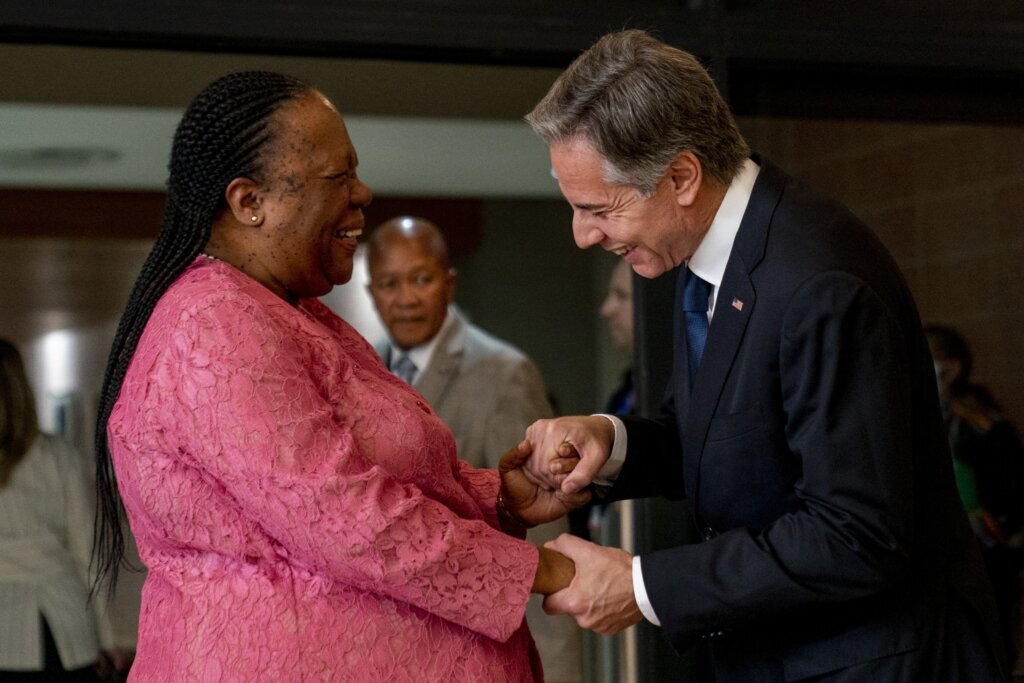 JOHANNESBURG (AP) — South Africa’s stance on Russia’s war in Ukraine and the adverse effects of the conflict on African countries are expected to feature in a meeting between U.S. Secretary of State Antony Blinken and South Africa’s Minister of International Relations Naledi Pandor on Monday.

Blinken is in South Africa as part of a three-nation tour of Africa including Congo and Rwanda in what is seen as a contest between Western nations and Russia to win support from African countries over the war in Ukraine.

South Africa is among many African countries that have taken a neutral stance on the Ukraine war and avoided public criticism of Russia.

Following his discussions with Pandor, Blinken will describe the Biden administration’s policies in sub-Saharan Africa in a speech at the University of Pretoria.

Speaking at the opening of the strategic dialogue on Monday, Pandor urged global leaders to use diplomacy to end various conflicts.

“The present moment, which has given rise to widespread uncertainty and fear, requires us all as leaders to come together and chart a way forward that will bring hope and inspiration to our respective peoples,” Pandor said.

“We must also reinforce our common commitment to multilateralism, democracy and human rights and use the proven tools of democracy, peaceful dialogue and negotiation to resolve conflict and end the intolerable and unnecessary suffering that results from wars and other forms of conflict,” she said.

Blinken said the good existing relations between the U.S. and South Africa, which include cooperation in health and trade, will allow for a frank discussion between him and Pando on issues where their views are different.

Pandor is expected to raise concerns about how the United States is pressing many African countries to denounce Russia for its war in Ukraine, political science professor at the University of Pretoria Christopher Isike told The Associated Press.

“Only last week, Minister Pandor frowned on the U.S. trying to force African countries to choose sides and to penalize them for engaging with Russia. She said she didn’t think that is the appropriate thing for the U.S. and Europe to do,” Isike said.

“I’m sure that this will come up in the closed meeting,” he said.

According to Isike, it’s important for the U.S. to allow African countries to make decisions that will benefit their people.

“These discussions are also very important because the U.S. strategy that they are going to be talking about today is one that talks about treating Africa as equal partners,” said Isike. “It is very important to put that approach into practice by not dictating to us who should be our partners or enemies.”

Frog Eye Tongue Piercing – What is it? How to Get it done?