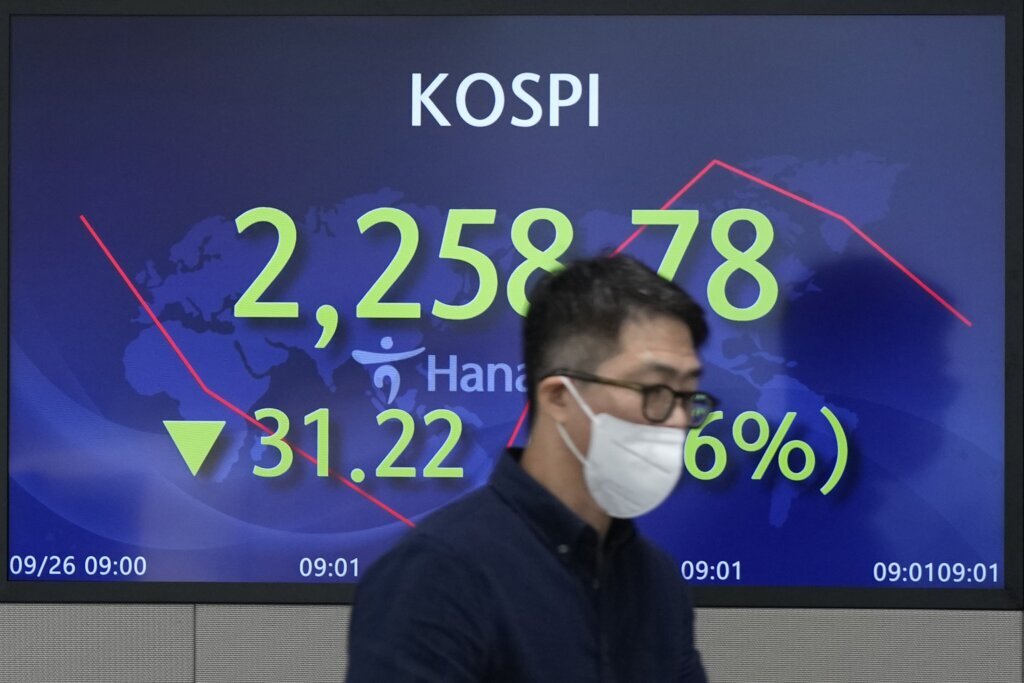 The British pound dropped to an all-time low against the dollar and investors continued to dump British government bonds in displeasure over a sweeping tax cut plan announced in London last week.

Markets in Europe were mostly lower. The head of the European Central Bank warned that the economic outlook “is darkening” as high energy and food prices pushed up by the war in Ukraine sap consumer spending power. France, the EU’s second-biggest economy, forecast a substantial slowdown in economic growth next year.

Casino and resort operators were a bright spot following reports that the gambling center of Macau will loosen travel restrictions in November. Wynn Resorts jumped 12.7%.

Smaller company stocks also lost ground. The Russell 2000 was down 0.8%.

The muted opening to the week comes amid an extended slump for major indexes. The benchmark S&P 500 is down more than 7% in September. Stocks have been weighed down by concerns about stubbornly hot inflation and the risk that central banks could push economies into a recession as they try to cool high prices on everything from food to clothing. Investors have been particularly focusing on the Federal Reserve and its aggressive interest rate hikes.

“We’re starting to have a handoff from fears about inflation and the Fed to global economic worries,” said Mark Hackett, chief of investment research at Nationwide. “We’ve reached a universal degree of pessimism.”

The Fed raised its benchmark rate, which affects many consumer and business loans, again last week and it now sits at a range of 3% to 3.25%. It was at virtually zero at the start of the year. The Fed also released a forecast suggesting its benchmark rate could be 4.4% by the year’s end, a full point higher than envisioned in June.

The goal is to make borrowing more expensive and effectively crimp spending, which would cool inflation. But, the U.S. economy is already slowing and Wall Street is worried that that the Fed’s rate hikes will pump the brakes too hard on the economy and cause a recession.

Higher interest rates hurt all kinds of investments, especially pricey technology stocks, and the market has been in a broad slump as rates rise. Treasury yields have climbed to multiyear highs as interest rates rise.

The recent rise in the U.S. dollar against other currencies is a concern for many countries. It dents profits for U.S. companies with overseas business, and puts a financial squeeze on much of the developing world.

Companies are nearing the close of the third quarter and investors are preparing for the next round of earnings reports. That will give them a better sense of how companies are dealing with persistent inflation.

Investors also have several economic reports on tap for this week that will give more details on consumer spending, the jobs market and the broader health of the U.S. economy.

The latest consumer confidence report, for September, from business group The Conference Board will be released on Tuesday. The government will release its weekly report on unemployment benefits on Thursday, along with an updated report on second-quarter gross domestic product.

On Friday, the government will release another report on personal income and spending that will help provide more details on where and how inflation is hurting consumer spending.

Business Writer Yuri Kageyama contributed to this report from Tokyo.

Rupee ends beyond 81 against dollar for the first time; lags EM peers