UGANDAN runner Victor Kiplangat claimed the gold medal in the men’s marathon at the Commonwealth Games – despite running the wrong way.

The 22-year-old took a wrong turn almost a mile away from the finishing line in Birmingham which threatened to cost him first place.

As he approached the end of the race, the long-distance specialist went the wrong way to leave the BBC Sport commentary team shocked.

With an aerial shot showing Kiplangat going the opposite direction, Steve Cram said: “Oh has he gone the wrong way? Oh no, no, no, no, no.”

Blaming the event organisers, he added: “It isn’t his fault. There is a blue line and he followed the vehicle… There should have been a lead bike. That is terrible.”

Paula Radcliffe then remarked: “I think he may have been focused on the bike ahead of him. 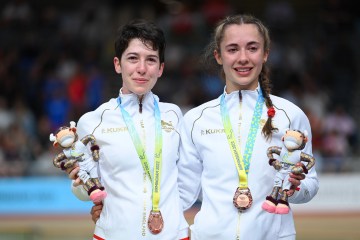 “Often the blue line can disappear too just because they haven’t marked out a particular section, and it is a dash not a solid blue line.

“He didn’t notice it had gone the other side of the median down the middle of the road, then of course when he did realise he couldn’t get through the barriers and just cross over, he actually had to double back.”

Thankfully for Kiplangat, he had built up a lengthy lead as he finished one minute and 34 seconds ahead of Tanzania’s Alphonce Simbu.

And the runner confirmed after his victory that he was left confused in the final stretch of the race.

He said: “The people riding the motorcycles were confusing me. They told me to turn back but I still made it to the finish.”

Kiplangat continued: “I believe Uganda is proud of me today. We have been waiting for this.

“I feel so happy to have won. Thanks to all the fans for cheering me on.

“I was feeling fatigue in my legs but the crowd were cheering me on and they gave me courage.”

Co-pilot dies after fall from plane in North Carolina