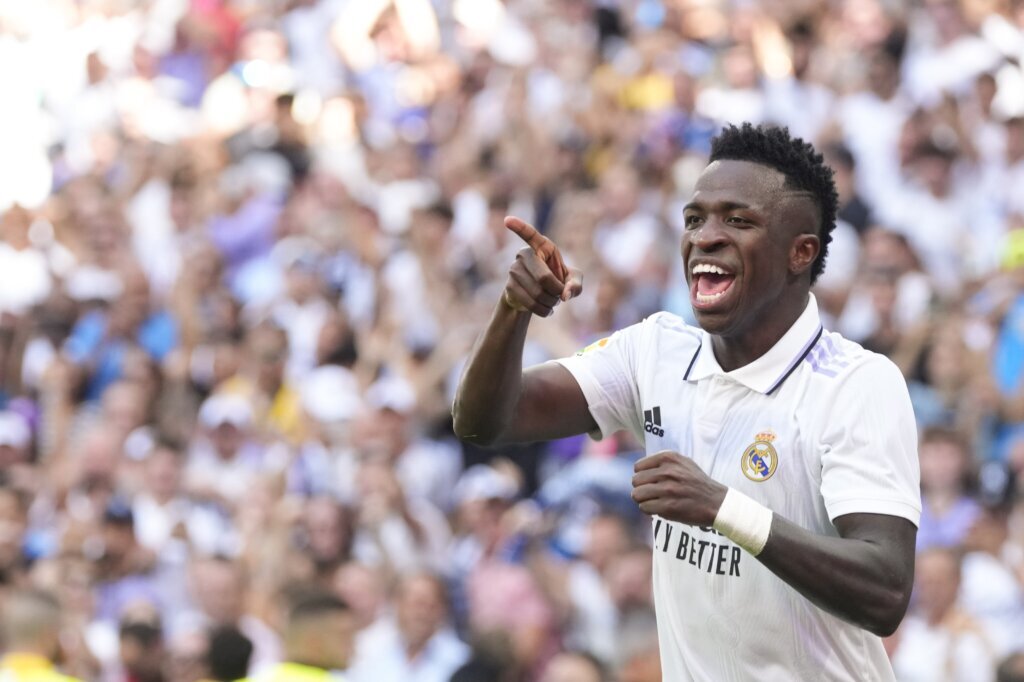 MADRID (AP) — Vinícius Júnior and Rodrygo came through in the absence of Karim Benzema to keep Real Madrid perfect this season.

Vinícius and Rodrygo scored second-half goals as Madrid came from behind to defeat Mallorca 4-1 for its fifth straight win in the Spanish league on Sunday.

Madrid was without the injured Benzema and other regular starters as coach Carlo Ancelotti rotated his squad ahead of the team’s Champions League match against Leipzig on Wednesday.

Mallorca got on the board first at the Santiago Bernabéu Stadium with a header by Vedat Muriqi off an assist by Lee Kang-in during a set piece in the 35th minute.

Madrid equalized three minutes into first-half stoppage time with a well-placed shot by Federico Valverde into the top corner.

Vinícius put Madrid ahead from inside the area after a nice pass by Rodrygo in the 72nd, then Rodrygo found the net himself in the 89th after a couple of nifty moves to get past three Mallorca defenders inside the area.

Defender Antonio Rüdiger closed the scoring in stoppage time with a shot from close range after a set piece taken by Toni Kroos.

Vinícius and Rodrygo — two Brazilians who joined the club as teenagers — had also scored a goal each to give Madrid a 2-1 win against Real Betis in the previous round.

The 22-year-old Vinícius, who also scored against Celtic in the Champions League, became the youngest Madrid player to score in four consecutive league matches since 21-year-old Gonzalo Higuaín in 2009.

“He’s a special player with the way he plays,” Ancelotti said. “He always looks to dribble regardless of whether the team is winning or losing. At times when an opponent is losing, they can get angrier than usual. It’s all part of football and he’s going to learn gradually from his experiences.”

The 21-year-old Rodrygo has participated in 11 goals in his last 11 matches with Madrid.

“Vini and I have a great understanding,” Rodrygo said. ”Our start couldn’t have been any better.”

Madrid is the only team in the top five European leagues with five straight victories. It hadn’t won five in a row to start its season since 2009-10.

It was the seventh straight victory for Madrid in all competitions. It also beat Eintracht Frankfurt in the final of the UEFA Super Cup and Celtic in its group opener in the Champions League.

Madrid’s next league match is at city rival Atlético Madrid next Sunday.

Benzema, the team’s best player last season, couldn’t play against Mallorca after injuring a tendon against Celtic on Tuesday. The injury was not serious but there was no official timetable for his return.

Ancelotti played with Eden Hazard up front on Sunday, and said the Belgium international had another “positive” display after scoring a goal and setting up the other two after replacing Benzema in the 3-0 win against Celtic.

Luka Modric and Eduardo Camavinga were among the regulars who started on the bench.

The victory left Madrid two points ahead of Barcelona, which has won four in a row, including 4-0 at last-place Cádiz on Saturday. Atlético Madrid won 4-1 against Celta Vigo at home for its third league win.

Real Betis moved to third place with a 1-0 home win over fourth-place Villarreal.

Rodri Sánchez scored a second-half winner for Manuel Pellegrini’s Betis, which has won four of its first five league matches. Its only loss was at Madrid last weekend.

Unai Emery’s Villarreal was also looking for its fourth league win. It had won six of its first seven games this season in all competitions.

Athletic Bilbao picked up its third win in five matches and moved closer to the top with a comfortable 4-1 win at winless Elche.

Nico Williams, the younger brother of Iñaki Williams, was among the scorers for Athletic for his first Spanish league goal.

It was the fourth loss for Elche, which sits in second-to-last place.

Getafe picked up its first win of the season by defeating Real Sociedad 2-1.

The Madrid club also has three losses and a draw.

Sociedad was coming off a win against Manchester United in the Europa League and a draw with Atlético Madrid in the Spanish league.