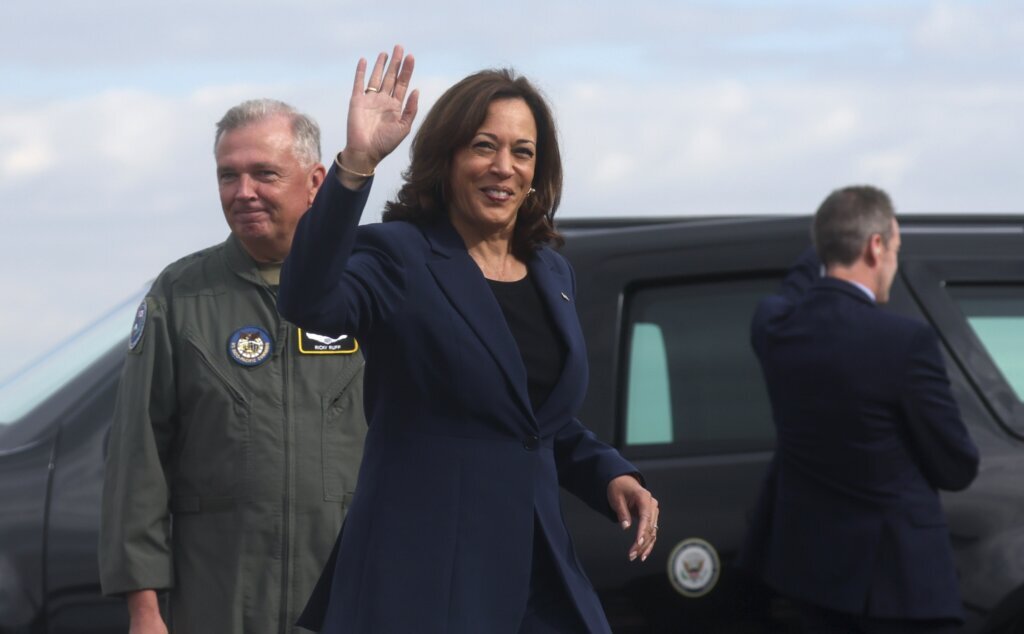 SEOUL, South Korea (AP) — U.S. Vice President Kamala Harris is capping her four-day trip to Asia with a stop at the heavily fortified Demilitarized Zone dividing the Korean Peninsula as she tries to demonstrate the U.S. commitment to the security of its Asian allies.

The visit on Thursday comes on the heels of North Korea’s latest missile launches and amid fears that it may conduct a nuclear test. Visiting the DMZ has become something of a ritual for American leaders hoping to show their resolve to stand firm against aggression.

North Korea fired two short-range ballistic missiles on Wednesday, while Harris was in Japan, and had fired one before she left Washington on Sunday. The launches contribute to a record level of missile testing this year.

Before going to the DMZ, Harris met with South Korean President Yoon Suk Yeol at his office in Seoul and praised the alliance between the countries as a “linchpin of security and prosperity.” Yoon, a conservative who took office in May, called her visit “another turning point” in strengthening ties.

Harris and Yoon were expected to discuss the growing North Korean nuclear threats and the U.S. commitments to defend the South. They were also expected to discuss expanding economic and technology partnerships and repairing recently strained ties between Seoul and Tokyo to strengthen their trilateral cooperation with Washington in the region.

Harris earlier spent three days in Tokyo, where she denounced North Korea’s “illicit weapons program” during a speech on an American destroyer at a naval base and attended the state funeral of former Japanese Prime Minister Shinzo Abe.

In Washington, White House press secretary Karine Jean-Pierre said the latest missile tests would not deter Harris from the DMZ and that she wanted to demonstrate America’s “rock-solid commitment” to regional security.

“As you know, North Korea has a history of doing these types of tests,” Jean-Pierre said, calling it “not unusual.”

Yoon had anchored his campaign with vows to deepen Seoul’s economic and security partnership with Washington to navigate challenges posed by the North Korean threat and address potential supply chain risks caused by the pandemic, the U.S.-China rivalry and Russia’s war on Ukraine. But the alliance has been marked by tension recently.

A new law signed by President Joe Biden prevents electric cars built outside of North America from being eligible for U.S. government subsidies, undermining the competitiveness of automakers like Seoul-based Hyundai.

South Koreans have reacted with a sense of betrayal, and Harris acknowledged the dispute in a conversation with the country’s prime minister, Han Duck-soo, on Tuesday in Tokyo.

“They pledged to continue to consult as the law is implemented,” the White House said of the meeting.

Scott Snyder, a senior fellow for Korea studies at the Council on Foreign Relations, said the dispute over electric vehicles has swiftly become a firestorm that U.S. officials cannot ignore, although there may not be a simple solution.

“It’s taking on a level of urgency that’s making it into a political problem that requires management,” Snyder said. “I don’t know that it’s going to be easy for the Biden administration to do that.”

Ilaria Mazzocco, a fellow at the Center for Strategic and International Studies, said it’s a question of whether the Inflation Reduction Act was intended to create American jobs or move supply chains out of China — “onshoring” versus “friendshoring.”

“It’s very tricky for U.S. policymakers. It’s tough to sell to voters that the U.S. is stronger when partner countries are stronger. But that’s the truth,” she said.

There could be more tension over gender issues during Harris’ visit to South Korea. After meeting Yoon, Harris, the first woman to serve as U.S. vice president, held a roundtable with female leaders in business, media, culture and sports on gender equity issues.

Yoon has faced criticism for the lack of female representation in government and his downplaying of broader inequalities. He claimed during his campaign that South Korea no longer has any structural barriers to women’s success, which experts say ignored the country’s large gender pay gaps and the underrepresentation of women in corporate board rooms and politics.

“If we want to strengthen democracy, we must pay attention to gender equity,” said Harris, who acknowledged that she raised the issue with Yoon.

As they did in Japan, however, regional security issues were likely to dominate the final day of Harris’ trip.

There are indications that North Korea may up the ante in its weapons demonstrations soon as it attempts to pressure Washington to accept the idea of the North as a nuclear power. South Korean officials said last week that they detected signs North Korea was preparing to test a ballistic missile system designed to be fired from submarines.

The U.S. aircraft carrier USS Ronald Reagan was to train with South Korean and Japanese warships in waters near the Korean Peninsula on Friday in the countries’ first trilateral anti-submarine exercises since 2017 to counter North Korean submarine threats, South Korea’s navy said Thursday.

U.S. and South Korean officials also say North Korea is possibly gearing up for its first nuclear test since 2017. That test could come after China holds its Communist Party convention on Oct. 16 but before the United States holds its midterm elections on Nov. 8, according to South Korean lawmakers who attended a closed-door briefing from the National Intelligence Service.

The spy agency repeated its earlier assessment, shared by U.S. intelligence, that North Korea had restored an underground tunnel at its nuclear testing facility as part of its preparations.

North Korea has used Russia’s war on Ukraine to accelerate its arms development. It has tested dozens of weapons, including its first long-range missiles since 2017, exploiting a divide in the U.N. Security Council, where Moscow and Beijing have blocked Washington’s attempts to tighten sanctions on Pyongyang.

Missiles tests have been punctuated by repeated threats of nuclear conflict. Pyongyang’s rubber-stamp parliament also authorized the preemptive use of nuclear weapons in a broad range of scenarios where its leadership comes under threat.

Senior U.S. and South Korean officials met in Washington this month for discussions on improving the allies’ deterrence strategies, but some experts said the meeting failed to produce anything new and exposed a lack of ideas on how to deal with the North’s evolving threat.

Yoon, during a news conference in August, said his government had no plans to pursues its own deterrent and called for North Korea to return to nuclear diplomacy, which imploded in 2019 over disagreements on exchanging the release of crippling U.S.-led sanctions against the North and the North’s disarmament steps.