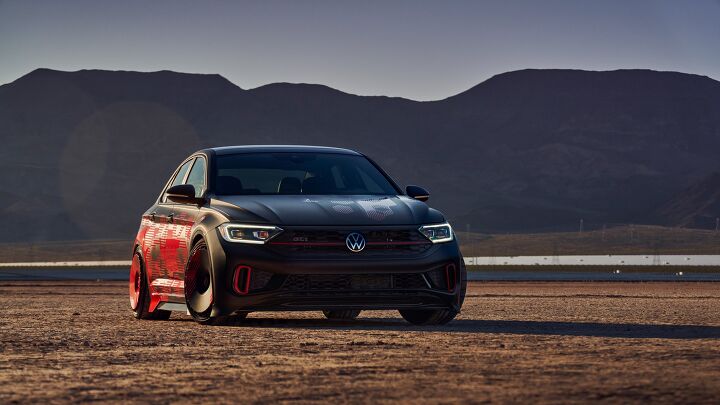 The Volkswagen Jetta GLI has long been the middle ground in performance for people who wanted a Golf GTI but needed sedan legroom. At this year’s SEMA Show, however, VW is giving the car its due with a motorsport-inspired concept car. Given its stated goal of going electric, it’s unlikely we’ll ever see this car in production, but it would be a great day for enthusiasts if it did.

Though it’s based on a 2022 Jetta, the GLI Performance Concept is brawnier than the standard car in almost every way. It got a RacingLine turbo performance package, a carbon fiber cold air intake, and a beefed-up intercooler. Those upgrades push the turbocharged 2.0-liter EA88 engine’s output to 350 horsepower and 372 pound-feet of torque. The factory six-speed manual and front-wheel drive setup remain in place, but VW fitted a performance clutch to handle the extra power.

Stopping and turning are just as important as power and acceleration, and Volkswagen says the concept’s suspension is capable of delivering a thrilling track experience while maintaining a comfortable ride on the street. The car got a RacingLine Stage3+ six-piston forged caliper big brake kit that brings 15-inch carbon ceramic discs. Adjustable coilovers help keep the concept stable on the track, and Rotiform provided a set of custom 20-inch wheels for the project.

Tesla’s the Best at Retaining Customers, but Many Others…

QOTD: What Car Looks Better in Person Than in Pics?