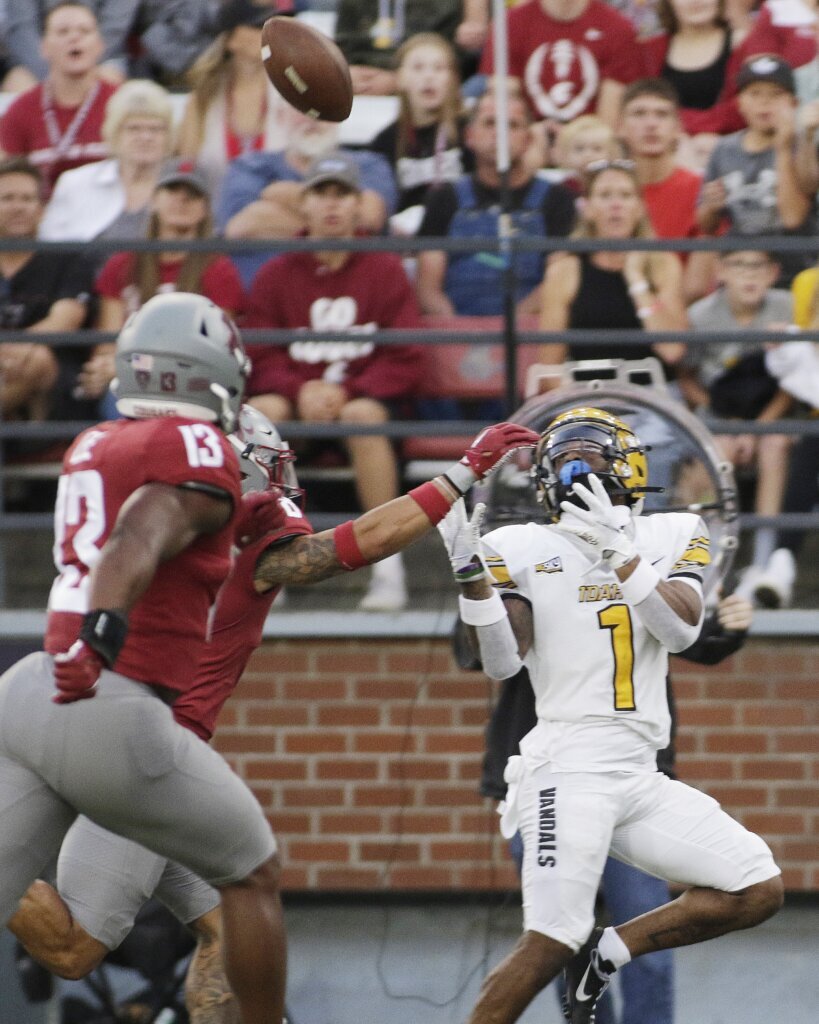 Ward completed 25 of 40 passes for Washington State, a Pac-12 team which leads the Battle of the Palouse series 72-17-3. But the Cougars had trouble putting away Idaho, an FCS team from the Big Sky Conference.

It was not until Ward threw a touchdown pass to Jaylen Jenkins with 10:33 left in the fourth quarter, putting Washington State up 24-10, that the Cougars appeared to take control.

But Idaho freshman quarterback Gevani McCoy replied with a 23-yard touchdown pass to Jordan Dwyer with 6:05 left in the game, cutting the WSU lead to 24-17.

McCoy led Idaho down the field, but was intercepted at the goal line by Daiyan Henley to end the threat.

McCoy completed 21 of 32 passes for 212 yards and was intercepted twice for Idaho, which was outgained 358 yards to 269 yards in the game.

Washington State fumbled the ball away on its first possession and receiver Donovan Ollie fumbled after catching a pass on the Cougars’ second possession. Marcus Harris scooped up the ball and ran 45 yards for a touchdown and a 7-0 Idaho lead.

Ricardo Chavez kicked a 27-yard field goal for a 10-0 Idaho lead late in the first quarter.

Ward marched the Cougars 80 yards on nine plays late in the second quarter, capped by a 3-yard touchdown pass to Renard Bell to cut Idaho’s lead to 10-7. Bell missed all of last season with an injury.

McCoy was intercepted at midfield by defensive back Chau Smith-Wade on the next series. But the Cougars stalled and had to settle for Janikowski’s 34-yard field goal that tied the score at 10-10 at halftime.

Idaho took the opening drive of the second half, but turned the ball over on downs. Ward marched Washington State down the field and hit De’Zhaun Stribling with a 13-yard touchdown pass for the Cougars’ first lead at 17-10.

Washington State: Jake Dickert got a tough win as he began his first full season as the Cougars’ coach. He went 3-3 with a Sun Bowl berth last season as interim coach after Nick Rolovich was fired for refusing to get a COVID-19 vaccine.

Idaho: Jason Eck was coaching his first game at Idaho, replacing the fired Paul Petrino, and gave Washington State a stiffer challenge than expected. Washington State paid a $575,000 guarantee to Idaho, a former FBS program that dropped to FCS five years ago.

Washington State: The Cougars play at Wisconsin on Saturday.

Idaho: The Vandals play at Indiana on Saturday.