FLOYD MAYWEATHER knocked out Mikuru Asakura in two rounds of their exhibition bout – in front of old rival Manny Pacquiao.

Filipino icon PacMan travelled to Japan for a ringside view of the scheduled three-rounder.

And he watched as Asakura made a bright start in the opening stages, landing to the body and keeping Mayweather at bay.

The self-proclaimed “Best Ever” was forced to evade heavy artillery coming his way.

Mayweather did pick up the pace towards the end of the opening round as he started to fire off his famous piston-like right hand.

The second proved to be all out action with the American starting on the front foot. 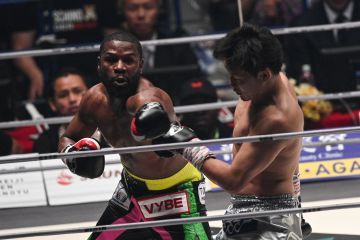 Mayweather, 45, landed a series of rear hand shots, both to head and body.

But Asakura, 30, fired back and even landed a perfect counter right hook, which snapped Mayweather’s head back.

That actually proved to be the beginning of the end as the 50-0 boxing icon poured on the pressure.

Asakura had no defence for a barrage of right hands coming his way and he was eventually floored just as the bell sounded.

He did his best to get to his feet but on shaken legs, experienced referee Kenny Bayless waved off the action.

It brought an end to six action-packed minutes, which saw Mayweather prevail in his fourth exhibition bout in as many years.

He said: “I would like to thank the whole country of Japan. Unbelievable country, unbelievable people.

“An exciting, crazy turnout, round of applause for this tough competitor.”

Pacquiao, 43, who retired last year, then entered the ring and embraced with Mayweather.

But he returned a year later, beating featherweight kickboxer Tenshin Nasukawa, 24, in one round of a RIZIN promoted card.

Mayweather is set to face YouTuber Deji, 25, next in Dubai in November but warned he will be back in the Far East soon.