LEEDS UNITED boss Jesse Marsch was sent off for moaning at the referee during his sides clash against Brentford.

Marsch went on a furious rant at the officials in the second half after Crysencio Summerville was brought down by Aaron Hickey, with a VAR review deeming the coming together not to be a penalty.

This decision sent Marsch into a frenzy, with the American frantically waving his arms at the officials.

Referee Robert Jones deemed Marsch’s action’s to be overzealous and subsequently sent him to the stands.

The Whites were already 3-1 down at the time of their manager’s dismissal, with Ivan Toney laying down his England credentials with an impressive hat-trick.

Marc Roca did pull one back with 11 minutes of normal time to go, but goals from Bryan Mbeumo and Yoane Wissa ended any hopes of a late comeback with the score ending 5-2 to the hosts. 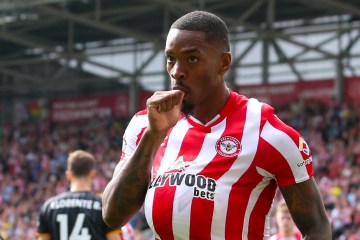 Toney’s second of the afternoon was the pick of the bunch, as he lashed in a stunning free-kick from 25 yards out.

The 26-year-old’s goal return since August 2018 now stands at 101, with only Harry Kane and Mohamed Salah boasting better numbers in that time.

In comparison, Leeds mustered just 1.48 xG while Thomas Frank’s side as a whole amassed 2.30 xG.

Despite the emphatic defeat, Leeds remain in the top half of the table.

However, the result see’s The Bees fly up the table and claim a seat of their own in the top half – a point ahead of Leeds.

Made in HimmerLand Scores – WTOP News