DEONTAY WILDER showed off his explosive power and hand speed in a sparring video posted by trainer Malik Scott.

The Bronze Bomber is hard at work as he prepares for his long-awaited return to the ring.

But the Tuscaloosa titan will be back in the squared circle on October 15, having signed to fight Swedish heavyweight Robert Helenius in Brooklyn.

Upon the announcement, Wilder said: “It’s been a long journey for me and as of today it continues.

“I thought so many times about whether I should stay out of the business or come back. 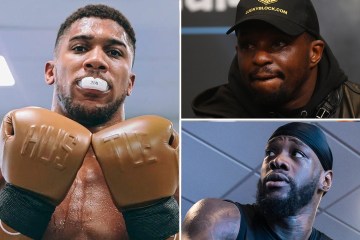 “Once I got my statue in my hometown and saw so many people arrive and celebrate with me and my family, to see all the emotions, grown men crying in front of their children and saying he is a real true king, made me feel like my job is not done.

“So where all my Bombzquad people at? It’s time to put on your war gear. And let’s go to work, baby. Bombzquad is back!”

Wilder began working with Scott ahead of the third Fury fight, and appears to be doing so again ahead of his next bout.

Scott, 41, has actually sparred with the Gypsy King before – and also helped Oleksandr Usyk ahead of his rematch with Anthony Joshua.

The strap is currently still held by Fury, although will be vacated if the Gypsy King follows through with his retirement.