JAVIER HERNANDEZ went from hero to zero as he missed a dramatic late penalty to complete his hat-trick in LA Galaxy’s 2-2 draw with Sporting Kansas City.

The 34-year-old scored in either half at the Dignity Health Sports Park as he brought up 14 MLS goals in the 2022 season so far.

Former Manchester United striker Hernandez broke the deadlock with a smart finish in the fourth minute before he pulled out the ‘dead fish’ celebration.

Football fans were loving the celebration, as one tweeted: “What a goal, what a celebration. Miss him in the PL, so clinical.”

Another commented: “The King.”

A third added: “It was a lil weak but A for effort, would of sent me if he ran and did it.” 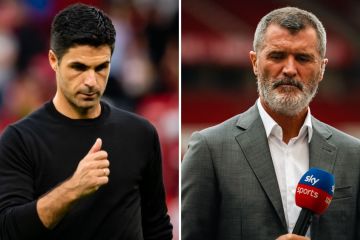 Sporting KC then turned the game on its head through second half goals from Johnny Russell and Felipe Hernandez.

But in late drama, Mexico international Hernandez equalised from the spot in the 88th minute.

And in dramatic scenes, he was then gifted the chance to claim all three points for Galaxy as well as his first hat-trick of the campaign after his side were awarded another penalty in the 97th minute.

However Hernandez was left red-faced after his soft Panenka attempt was saved by goalkeeper John Pulskamp.

His effort lacked any disguise of a chip as Pulskamp stayed on his feet to simply catch the floating ball.

Hernandez stated it was his fault Galaxy failed to get the win, despite his two goals helping Greg Vanney’s men nick a point.

Speaking after the match, he said: “It’s a mental game and I dared to take the shot, and the responsibility of not getting the two [extra] points falls on me. I accept it, one hundred percent.”

He continued: “Unfortunately, I caused my team to drop two points.

“But I’m going to keep on working. There’s no other way and I have to accept my responsibility.”

“He [Pulksamp] guessed right and that’s it.”