EX-MANCHESTER UNITED defender Marcos Rojo was sent off for Boca Juniors after landing a brutal Kung-fu kick on a River Plate player.

Rojo, 32, has spent the last two years playing in his home country of Argentina.

And he’s been a mainstay in the Boca team, helping them win the Professional League Cup as well as wearing the captain’s armband.

But a moment of madness in Sunday’s Superclasico with River Plate saw Rojo be sent off for a Kung-fu kick.

Boca were leading 1-0 deep into added-time when the incident happened. 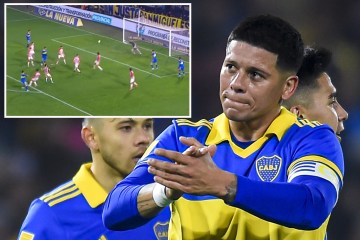 The referee left little time before brandishing the red card.

Luckily for the home side, Boca went on to secure a 1-0 win over their rivals.

The win lifts Boca up to fourth in the Argentine top flight.

Meanwhile, River Plate are stuck down in seventh, three points off Boca.

1 dead following crash on I-70 in Frederick Co.