DIDIER DROGBA was left stunned when a young fan asked him to sign his Chelsea shirt… only to then find out that he was sporting an Arsenal top underneath.

The former striker, 44, was happy to sign a Chelsea shirt for the boy at an event earlier this week.

But, before leaving, the young fan took off the Blue strip to reveal that he was wearing Arsenal’s red home shirt underneath.

He saw the funny side to it though and continued to laugh with the young lad before signing the Arsenal strip.

Fans took to Twitter to react, with one writing: “Give that kid a national merit award!” 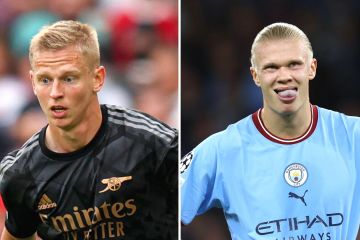 A third said: “Top tier banter. Put it in my veins, then in the hall of fame!!!”

While a fourth joked: “This kid needs to be handed into the FBI.”

Drogba made 381 appearances across the nine years he spent at Stamford Bridge.

During that time he scored 164 goals and assisted 86, making him one of Chelsea’s all-time top goalscorers.

But, he once admitted that he was actually a boyhood Arsenal fan.

When speaking to the official Chelsea website – as quoted by FourFourTwo in 2009 – he said: “I like to play against Arsenal because they used to be the team people supported in France because of all the French players there, so I was supporting them as well.”