THIS is the brilliant moment Lewis Hamilton overtook TWO rivals in one move at the Italian Grand Prix.

And it was so impressive that even rival Max Verstappen was blown away watching it.

That’s despite starting in 19th place while also suffering damage from debris on the first lap.

The pinnacle of Hamilton’s terrific race came on Lap 36 when McLaren’s Lando Norris emerged from the pit lane.

He immediately became tangled in a battle with AlphaTauri’s Pierre Gasly. 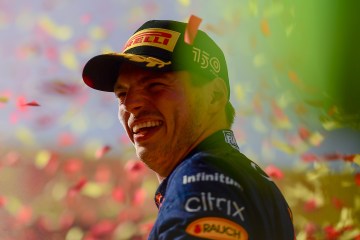 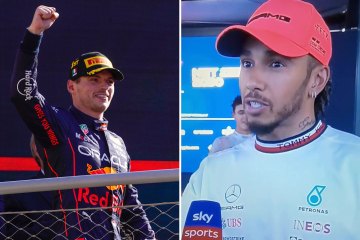 But Hamilton, who was ninth at the time, quickly closed the gap to the pair.

He then found a better line for traction out of the first chicane to slip past both rivals into seventh place.

Hamilton’s soft tyres then allowed him to pull away before eventually overtaking McLaren’s Daniel Ricciardo and Red Bull’s Sergio Perez.

After the race, winner Verstappen and Hamilton’s teammate George Russell – who came third – were both watching replays as they waited for the trophy presentation.

A clip came up of Hamilton’s double overtake, forcing Verstappen to excitedly point it out.

Speaking after the race, Hamilton expressed his delight at clawing back a fifth-place finish from the back of the grid.

He declared: “It was a good race, I didn’t expect (the result).

“The guys were saying anywhere between sixth and fourth was possible, that always feels like a stretch for me, but I had fun.

“It was tricky in the beginning, with the car heavy and behind everyone, trying to avoid a collision at the first corner and ended up getting stuck behind an AlphaTauri once again.

“But I’m really grateful that I got through and got those points.

“In the end, the two guys behind had fresher tyres so I’m kinda glad it finished the way it did.”