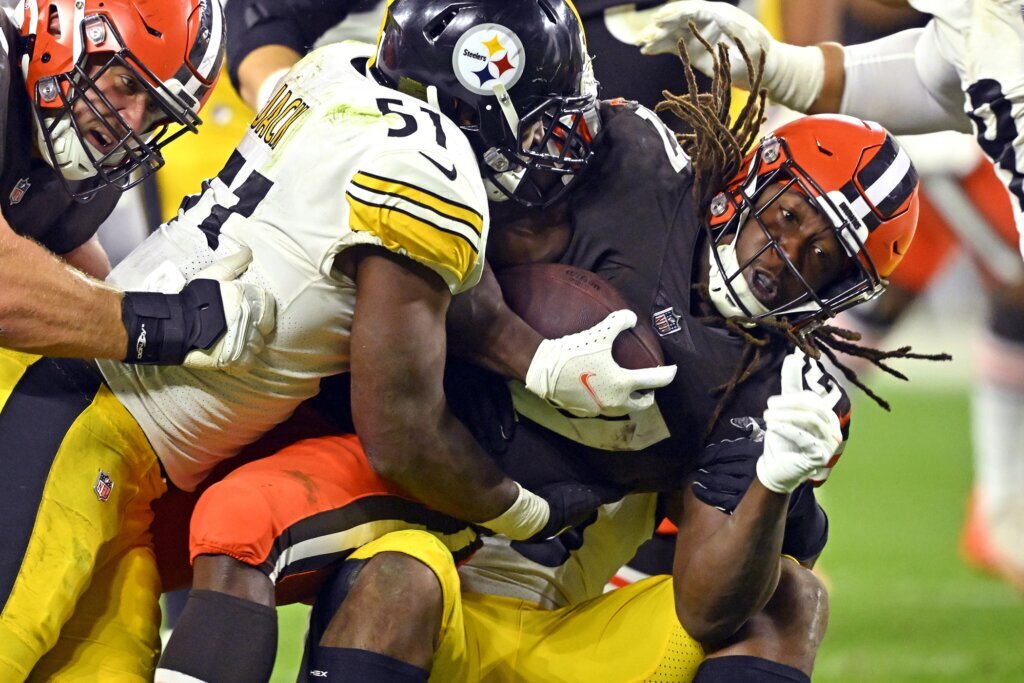 PITTSBURGH (AP) — The solution for much of what is ailing the Pittsburgh Steelers defense is right there hiding in plain sight on the practice field most days, simultaneously close at hand and tantalizingly out of reach.

T.J. Watt’s legs are fine. The status of his left pectoral muscle, however, remains a mystery.

Maybe he’ll be out another month. Maybe more. Maybe less. It will be at least two more weeks before the reigning NFL Defensive Player of the Year is eligible to come off injured reserve.

By then, it may already be too late to save Pittsburgh’s season. The Steelers are 1-2 heading into Sunday’s visit by the New York Jets.

More specifically, they’re 0-2 with Watt standing on the sideline in sweats after walking off the field in Cincinnati on Sept. 11 clutching his chest and they’re 0-6 during Watt’s career when his familiar No. 90 is out of the lineup.

Watt’s ability to wreck the game plans of opposing offensive coordinators can cover a lot of warts, ones that have been exposed during back-to-back losses to New England and Cleveland.

The Patriots churned out the last 6:33 of a taut 17-14 win in Week 2 by relying almost exclusively on the running game. The Browns pushed the Steelers around in the second half last Thursday, grinding out two long second-half touchdown drives by relying heavily on the ever-churning legs of Nick Chubb.

After spending much of the offseason trying to fix a run defense that finished last in the NFL a year ago — it’s a testament to Watt’s generational talent and the late-game heroics of now-retired quarterback Ben Roethlisberger that the Steelers still somehow managed to make the playoffs — Pittsburgh is still getting pushed around far more than it is pushing back.

The Steelers are 28th against the run through three games, and they know opponents are going to try and run on them until they prove they can stop it.

“It’s a copycat league,” defensive tackle Montravius Adams said. “So if we (continue to) struggle a little bit with that, I’m sure initially (opponents) will start off by trying to hit us with the run.”

That’s part of the problem. Pittsburgh knows what’s coming. It simply hasn’t been able to stop it.

Not with Watt out anyway. And not with an offense that is sputtering in late-game situations struggling to give the defense a breather.

While coach Mike Tomlin essentially doubled down on keeping Mitch Trubisky as the starting quarterback this week, he promoted the 27-year-old Adams to first string over 35-year-old Tyson Alualu, who is off to a slow start after missing most of last season with a fractured ankle.

Adams is no savior. The Steelers claimed the former third-round pick by Green Bay in 2017 off the New Orleans’ practice squad last November, where he was languishing after three uneventful years with the Packers and a brief stop in New England.

Yet the 6-foot-3, 304-pound Adams is a little taller, a little quicker and a little fresher than Alualu. Austin believes Adams brings a “different component” to a defensive front that needs to take up more space to allow the linebackers to go to work.

“We got him in the middle of the year last year and so now he’s kind of really been in our system and really understands it,” Austin said. “So you can kind of see the growth in him as a player.”

Yet it will take far more than giving Adams more snaps for the Steelers take a significant step forward. And for all the intricacies and wrinkles a defense adds throughout a year, sometimes the job is simple: beat the man in front of you. Far too often in far too many crucial situations, the Steelers have found themselves backing up instead of pressing forward.

“We’re giving teams things instead of them outright beating us,” inside linebacker Myles Jack said. “I’m very excited, man. I think it’s going to be good from here on out.”

It needs to be if Pittsburgh wants to hang around in a division featuring two of the league’s best running teams and an upcoming schedule that includes Buffalo and Philadelphia, clubs whose quarterbacks can do as much damage with their legs as their arms.

“It’s meeting, it’s detail, it’s performance on the field,” Austin said. “We’ve just got to put those things together and I’m confident we will.”