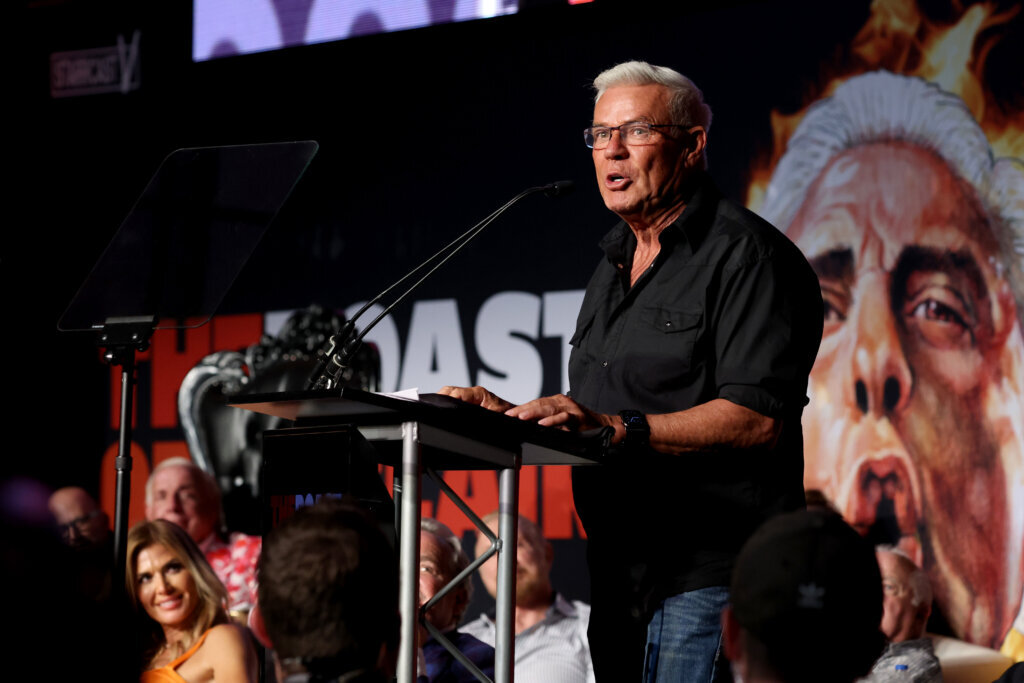 His successful podcast “83 Weeks” details exactly how he beat Vince McMahon’s WWF (now WWE) in the ratings for 83 straight weeks. Now, WCW legend Eric Bischoff has penned his second memoir “Grateful,” which is available for presale before its release in November.

His successful podcast “83 Weeks” details exactly how he beat Vince McMahon’s WWF (now WWE) in the ratings for 83 straight weeks. Now, WCW legend Eric Bischoff has penned his second memoir “Grateful,” which is available for presale before its release in November.

“When I was approached to write a book at WWE, which became ‘Controversy Creates Cash,’ I was like, ‘Really? What would I talk about?’” Bischoff told WTOP. “It ended up on The New York Times bestseller list for a hot minute, but the process of doing it was really interesting, going back, remembering things, putting together details to recreate a picture.”

While “Controversy Creates Cash” covered his pre-2006 career, “Grateful” covers his post-2006 career from his brief return as a WWE executive to his on-air stints in TNA and AEW.

“I was approached by Guy Evans, who wrote a great book, ‘The Incredible Rise and Inevitable Fall of Ted Turner’s WCW,’” Bischoff said. “He said, “I’ve been following you a while, listening to your podcast, I think you’ve got a lot to say, would you consider [another book]?’ … It made me realize things that I was probably too self-absorbed to otherwise.”

Beyond the mat, “Grateful” also details his personal quest for gratitude.

“A young lady in Phoenix told me about … losing her dad [and] needing someone to walk her down the aisle,” Bischoff said. “I made a difference. … Once I started recognizing all the things around me that I have to be grateful for, everything else got easier. Doors opened up, relationships opened up. I was like, ‘Hmm, there’s something to this stuff.’”

“I’ve always been a salesman,” Bischoff said. “I had a meeting about an opportunity … to do some marketing with Verne Gagne. Somewhere that initial meeting turned into, ‘Hey, how’d you like to come to work for us?’ I didn’t even know what syndication was!”

In 1991, he was hired by Ted Turner to join WCW. After Bill Watts resigned in 1993, Turner Broadcasting promoted Bischoff to executive producer where he made numerous changes to help the once-fledgling wrestling company turn a profit for the first time in 1995.

“WCW had been traveling all over the southeast producing their shows in arenas, so they had a live audience, but they couldn’t draw flies,” Bischoff said. “I started looking into producing the show at Disney MGM Studios. … You can reduce your production costs and really increase the production values because now you’re shooting on a soundstage.”

Turns out, the biggest wrestler on the planet was also filming at Disney MGM Studios.

“Coincidentally, Hulk Hogan was filming a show called ‘Thunder in Paradise,’” Bischoff said. “Through Ric Flair, I had a conversation with Hulk late one night, he called me at like 1 or 2 in the morning. I was sound asleep. ‘Hey, brother, Hulk Hogan here.’ He had to tell me who he was, like I wouldn’t recognize his voice! … The relationship grew from there.”

He also upped the number of pay-per-view events to monthly to supplement tent-poles like “Bash at the Beach,” “The Great American Bash,” “Halloween Havoc” and “Starrcade.”

“The only revenue WCW could increase upon quickly was PPV,” Bischoff said. “I got a call in 1995; Ted said, ‘Eric, what would it take to become competitive with WWF?’ … I go, ‘They’re in primetime and we’re on Saturday nights … we can’t be competitive.’ … He went, ‘Give Eric two hours every week head-to-head with ‘Monday Night Raw’ on TNT.’”

“That was all about creating spontaneity,” Bischoff said. “We did a lot of research with focus groups across the country. … One of the things that came out consistently … was they liked surprises and they liked spontaneity. … Lex Luger was a great opportunity right off the bat to get people talking, to have a nitroglycerin moment, spontaneous combustion.”

More WWF stars jumped ship for bigger WCW contracts, namely Scott Hall (Razor Ramon) and Kevin Nash (Diesel), who arrived as The Outsiders taking audiences backstage into the TV trucks. When Hogan turned heel to join Hall and Nash, Bischoff created an iconic faction that can still be seen on t-shirts to this day: the New World Order or the NWO.

“Everybody recognized wrestling as scripted,” Bischoff said. “I wanted to find a way to blur the lines. … That’s what the NWO was all about. It was unpredictable, it was spontaneous and it was different. … That coincides with the way the audience was enjoying television and movies [with] badass bad guys. You couldn’t help but wish you were one of them.”

While the NWO represented a new brand of cool heels, Bischoff also built babyfaces like Goldberg, Sting and Diamond Dallas Page. However, his lasting legacy might just be the cruiserweight division, giving smaller wrestlers a shot in what had long been the land of the giants.

“The thing I’m really most proud of …. is the cruiserweight division, the impact it’s had on today’s product,” Bischoff said. “‘What the hell are these little guys doing on TV?’ … People thought I was nuts. … Rey Mysterio, Chris Jericho, Eddie Guerrero, Dean Malenko, Chris Benoit, those guys changed the audience’s appreciation for their style of wrestling.”

Most controversial was Bischoff luring WWF champion Bret Hart, who refused to drop the title in his native Canada to real-life rival Shawn Michaels on Nov. 9, 1997. This forced McMahon to plan the infamous “Montreal Screwjob,” having the referee ring the bell for a phony Hart “submission” as Hart spit on him and traced the letters “WCW” on camera.

“Bret was concerned that losing before he came in would hurt his positioning. I said, ‘It doesn’t matter. You’re Bret Hart,’” Bischoff said. “Vince was preoccupied with getting that belt off of Bret before I could figure out a way to convince him to put it in a box and ship it to me. … Ask yourself, ‘What would you do?’ You probably would’ve done what Vince did.”

The moment instantly turned McMahon into the biggest heel in the business, a role he embraced on camera to slowly chip away at WCW’s dominant streak of 83 straight weeks.

“It was neck-and-neck from day one, but it wasn’t until ’96 that [WCW] started eating them alive every Monday night,” Bischoff said. “WWE was a teen and pre-teen show. … It was Doink the Clown. … I went the other way, I went for 18 to 49-year-old men. … Vince went, ‘OK, we’re going to do what they do. Let’s get a little raunchier, edgier, more dangerous.’”

The WWF Attitude Era was born with superstars like Stone Cold Steve Austin, The Rock, The Undertaker, Kane, Triple H and Mankind, whose pre-taped title victory on Jan. 4, 1999 turned the tide despite WCW announcer Tony Schiavone spoiling the results with the quip, “That’ll put butts in the seats.”

What was the moment Bischoff knew he was in trouble?

“The real pivot point where I really took notice was when they brought in Mike Tyson,” Bischoff said. “The way they used Tyson to set up Austin versus McMahon was pure genius! That’s what launched Steve Austin. … Now he’s Stone Cold Steve Austin, chugging beer, flipping people off and kicking the boss’ rear end. That changes everything!”

“I didn’t prevent them from coming in,” Biscoff said. “I was in the middle of the ring on a live television show when they came to the door. … That was a decision made by Head of Security Doug Dellinger. It was the right decision. … What if things went bad? [DX] came in on a jeep with a fake machine gun! Are you gonna let them into the back of your arena?”

“All’s fair in love and war,” Bischoff said. “Having one of [Vince’s] talents end up on my show without telling anybody, dropping the Women’s WWF Championship in the garbage on national television, calling him out for a fight, giving away finishes to his taped shows. … I loved the ‘Billionaire Ted’ skits. Ted loved them! … Ted laughed his ass off!”

In the end, what caused the downfall of WCW? Was it the bloated dilution of the NWO? Goldberg injuring Hart? Hogan beating Nash with the Finger Poke of Doom? Jeff Jarrett laying down for Hogan to pin him? Vince Russo moving in while Bischoff was moving out? Or too many rising stars like Jericho, Big Show and The Radicalz leaving for the WWF?

“At TBS headquarters, there was a merger going on,” Biscoff said. “A senior official said, ‘I want you to make your show family friendly.’ … I took a $28 million company and turned it into a $350 million in 36 months. Now a guy who doesn’t even watch the product tells me I’m going to change back to doing things the guy I beat used to do and is no longer doing!”

In 2001, WWF won the war when McMahon purchased WCW. Fans were excited for dream match-ups between their favorites from each company. However, while some joined WWF right away for a rushed invasion angle (Booker T, DDP, Flair), many WCW titans (Hogan, Hall, Nash, Goldberg) sat out the remainder of their contracts before joining the federation at a later date.

“They tried to get me to come in for that angle and I turned them down,” Bischoff said. “I didn’t know it was for an invasion angle. They didn’t tell me anything. I got a call from Jim Ross one day, ‘Eric, the boss would like you to come in. … Be ready to go on Monday.’ I said, ‘Jim, it’s Thursday.’ … It would have been nice if they had given a little more time.”

“The book is about wrestling … but it is a really honest look at my life,” Bischoff said. “I’ve had some amazing professional highs. … I’ve made billions of dollars … but there’s been times in those 15 years where I’m not doing so OK. I never hit rock bottom, but I bounced off it a few times. Realizing how important gratitude is … that’s what this book is about.”

As you’re reading “Grateful,” you can enhance your experience with a special feature.

“We’re going to have a QR code at the end of every chapter, so if there’s someone I’m talking about, if I’m talking a lot about you and our relationship in Chapter 1, there’s going to be a QR that the reader can take their phone and they’re going to get an interview from you and we’re gonna hear your perspective on that chapter. Never been done before!”

“If you get out of bed in the morning and you’re not trying to think of something that’s never been done before, I’m not sure why you do it,” Bischoff said with a smile.