LEICESTER defender Wesley Fofana has been forced to train with the Under-23s after he failed to turn up to training one day last weel.

His manager Brendan Rodgers confirmed that he has been banished from the first-team amid the player wanting leave for Chelsea.

SunSport can exclusively reveal that the Blues are now pulling out of the deal after seeing a third bid of £70million rejected.

Leicester are holding out for a reported £85million.

Rodgers said: “There was an offer gone in and its been rejected.”

He also confirmed the 21-year-old has not been in the right frame of mind to play after missing the last two games: “He’s training with the under-23s so he can get his football fitness and keep working. 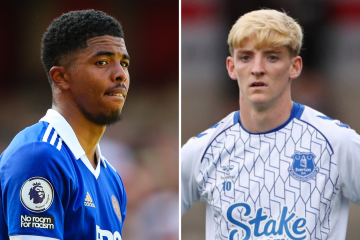 “It’s so important at this stage to control any sort of distractions that may be there.

“He’s a good kid, it’s just been a really challenging situation for him.

“I’ve had it a number of times in my career where there’s players who can deal with it, cope with it, get on, want to help their teammates. There’s others that just can’t deal with with the distraction.

“You need the full commitment from your players. These guys get well paid. The very least you can do is turn up. And if you don’t, with all due respect, you cant then just think you can walk into our group.

“Of course, if it [Fofana leaving] happens, the sooner the better, because it might allow us to do some work [in the transfer window].”

Fofana was not part of the Foxes’ squad that lost to Southampton 2-1 at the weekend.

He was also pictured not celebrating when Leicester scored.

He has since also missed out on the Carabao Cup clash versus Stockport.

With Chelsea refusing to up their bid it remains to be seen whether the Frenchman will resume playing again.

Thomas Tuchel’s side could be set to turn their attention to Brighton’s Adam Wesbter, according to reports.

As for Leicester, they have made just one signing this summer in back-up goalkeeper Alex Smithies.