What is a ruck in rugby union?

RUGBY UNION is a sport that can seem confusing to the casual fan, so here we break down the parts of the game that can leave you going, ‘What the ruck’?

After England were victorious Down Under and with the Premiership on the horizon next month, it is an exciting time for the sport.

So, here, we help make sure you don’t get caught short on your knowledge in front of your mates in the pub when the big games come around. 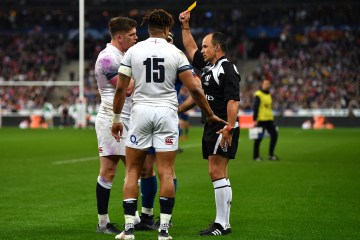 What is a ruck in rugby union?

They are one of the most dangerous and physically demanding parts of the sport.

Coaches like England’s Eddie Jones are known to drill them relentlessly.

They are created when the ball is on the ground and at least one player from each team gets close to it.

Players cannot handle the ball or a penalty will be given, they instead must use their feet to move it or drive over it so that it leaves the ruck, only at that time can it be picked up.

A player must bind with a full arm and at all stages players cannot have their heads and shoulders any lower than their hips.

How are teams penalised at a ruck?

Being offside. The offside lines are parallel to the goal-lines and run through the trailing foot of the player furthest back.

If that point is behind the goal-line, then the goal-line is the also the offside line for the defending team.

Players must join from the back of the ruck or concede a penalty.

Players need to try to stay on their feet, they also must be bound to the ruck and not by the side.

The ball can be played with feet – but only in a safe manner.

If on the ground, players must attempt to move away from the ball as it emerges.

A penalty will be awarded if any player collapses a ruck or deliberately steps on another.

Or also if anyone attempts to kick the ball out of a ruck.

However a free-kick is the punishment if any player returns the ball into the ruck or falsely makes opponents believe the ruck has ended.

Teams like Ireland , for example, used rucking superbly in their series win over New Zealand.

Possession can be won by pushing the other team off the ball.

An unsuccessful ruck is when the ball is made unplayable, at which point a scrum is won by the team who were moving forward.

If the ball has been clearly won, the ref says “use it”, then it must be played away from the ruck in five seconds or a scrum will be awarded.

But if the ref rules the ball will not emerge in a reasonable time frame, then a scrum is awarded.

Liverpool vs Rangers bonus: Get money back as CASH if you lose, plus…