What takes years and costs $20K? A San Francisco trash can 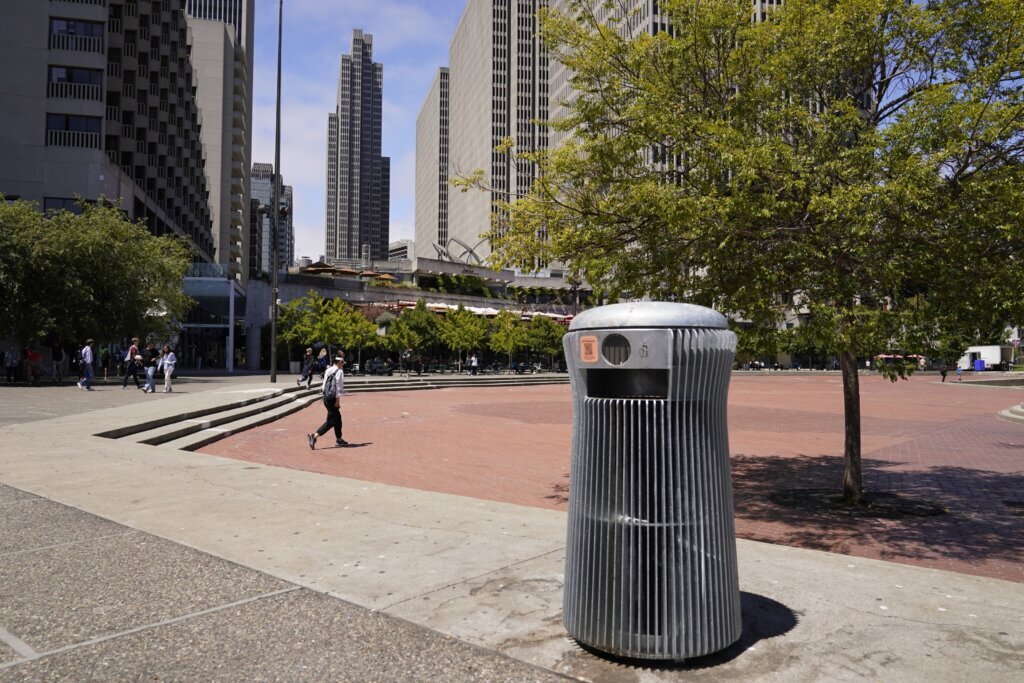 SAN FRANCISCO (AP) — What takes four years to make and costs more than $20,000? A trash can in San Francisco.

That costly, boxy bin is among six trash cans hitting San Francisco’s streets this summer in the city’s long saga in search of the perfect can. Overflowing trash cans are a common sight in the Northern California city, along with piles of used clothes, shoes, furniture and other items strewn about on sometimes-impassable sidewalks.

City officials hired a Bay Area industrial firm to custom-design the pricey trash can along with two other prototypes that cost taxpayers $19,000 and $11,000 each. This summer, residents have the opportunity to evaluate them along with three off-the-shelf options added to the pilot program after officials faced criticism.

Last month, the city deployed 15 custom-made trash cans and 11 off-the-shelf trash cans — each of those costing from $630 to $2,800 — with QR codes affixed to them asking residents to fill out a survey. City officials said they intend to pay no more than $3,000 per can.

San Francisco began its search for the perfect trash can in 2018 when officials decided it was time to replace the more than 3,000 public bins that have been on the streets for almost 20 years.

Officials say the current bins have too big a hole that allows for easy rummaging. The bins also have hinges that need constant repair and locks that are easy to breach. Some people also topple them over, cover them in graffiti, or set them on fire.

The city is so serious about the endeavor it has created interactive maps so residents can track and test the different designs, which include the Soft Square, the priciest prototype at $20,900. The boxy stainless steel receptacle has openings for trash and for can and bottle recycling and includes a foot pedal. The Slim Silhouette, at $18,800 per prototype, is made of stainless steel bars that give would-be graffiti artists less space to tag.

If one of the custom-designed bins is chosen, the cost to mass produce it will be $2,000 to $3,000 per piece, said Beth Rubenstein, a spokeswoman for San Francisco’s Department of Public Works.

“We live in a beautiful city, and we want (the trash can) to be functional and cost-effective, but it needs to be beautiful,” she said.

But the good looks of the shiny new trash cans have not protected them from vandalism and disrespect. Three weeks after being unveiled, several have already been tagged with orange and white graffiti. Others already show the drip stains of inconsiderate coffee drinkers or have attracted dumping, with people leaving dilapidated bathroom cabinets and plastic bags full of empty wine bottles next to them.

Trash on San Francisco city streets has been an issue for decades. In 2007, then-Mayor Gavin Newsom eliminated about 1,500 of the city’s 4,500 trash cans because he said they were not helping keep streets clean and were becoming magnets for more trash. Officials couldn’t say how many receptacles are currently on the curb, but the city plans to replace at least 3,000.

“A trash can is one of the most basic functions of city governance and if the city can’t do something as simple as this, how can they solve the bigger issues of homelessness and safety and poverty?” asked Matt Haney, a former supervisor who lives in the Tenderloin neighborhood and now represents the area in the California Assembly.

New trash cans will be the latest addition to the city’s arsenal against its dirty streets. In 2014, San Francisco launched its “Pit Stop” program in the Tenderloin neighborhood, the epicenter of drug dealing and homelessness in the city, setting up portable public toilets. In 2018, the city created a six-person “poop patrol” team amid demand to power wash sidewalks.

Haney said that as a supervisor he reluctantly agreed last year to approve the pilot program despite the high prices to avoid delays.

“I think most people, including me, would say just replace the damn cans with cans that we know work in other cities, just do it,” he said.

Haney said the “whole trash can saga has this stench of corruption,” referring to disgraced former Department of Public Works Director Mohammed Nuru, who pleaded guilty in January to federal wire fraud charges. Nuru awarded the contract to maintain San Francisco’s trash cans to a company owned by a relative of a developer who has pleaded guilty to conspiracy and is cooperating with federal authorities in the case against Nuru.

On top of the corruption, the city has long been the butt of jokes for how long it takes to complete public works projects of all kinds.

A bus rapid transit system along Van Ness Avenue, one of the city’s main arteries, finally opened this year after 27 years of construction. A new subway line connecting Chinatown with other areas of the city that started construction in 2010 is four years behind schedule. In 2017, the city completed the Transbay Transit Center only a year late, but the $2 billion terminal abruptly shut down six weeks later after crews discovered two cracked steel girders.

Ultimately, what trash can the city gets will depend on feedback from sanitation employees, and the surveys completed by the end of September, Rubenstein said. The new cans are not expected on the streets until the end of 2023.

Diane Torkelson, who often picks up trash in her Inner Richmond neighborhood with other volunteers, recently trekked 5 miles (8 kilometers) with a dozen other civic-minded San Franciscans to examine three of the cans.

The two prototypes were already full when the group arrived to check them out, she said.

“If the trash can is full, it’s of no use, no matter how well it was designed,” she said.