Which team has scored the most goals in the 2022 World Cup and where does England rank?

WHILE the 2022 edition of the World Cup has had an incredible amount of 0-0 draws at half-time, fans have still been treated to some high scoring games.

And England were mightily impressive in one of these matches, netting six against Iran in their opening game.

England were on fire against Iran, with Bukayo Saka netting twice[/caption]

But just who has scored the most goals in the tournament?

We have all the up-to-date information for you on the highest scorers in Qatar. 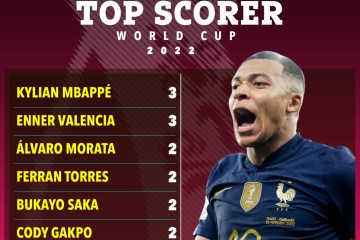 World Cup 2022 top scorers: Here’s who is leading the race for the Golden Boot

Which team has scored the most goals in the 2022 World Cup?

Spain have netted the highest goals in a single game at the World Cup this winter, coming out 7-0 victors against Costa Rica in Group E.

However, Luis Enrique’s side are NOT the highest scorers at the tournament despite this.

Spain were on goal scoring form against Costa Rica[/caption]

England are ahead of the Spaniards despite having failed to score in their 0-0 draw to the USA.

The Three Lions are aided by the six goals netted against Iran, but also went on to put three past Wales, putting them on nine goals.

This is one ahead of Spain, who added to their goals from the first match in their 1-1 draw with Germany.

Marcus Rashford has scored three times so far for England[/caption]

Despite this, England have played one match more than Spain and are already into the last-16, so the Spaniards will have the chance to catch England.

France are currently third for goals scored, sitting on six, while the likes of Senegal, Netherlands, Portugal and Ghana have all scored five so far.