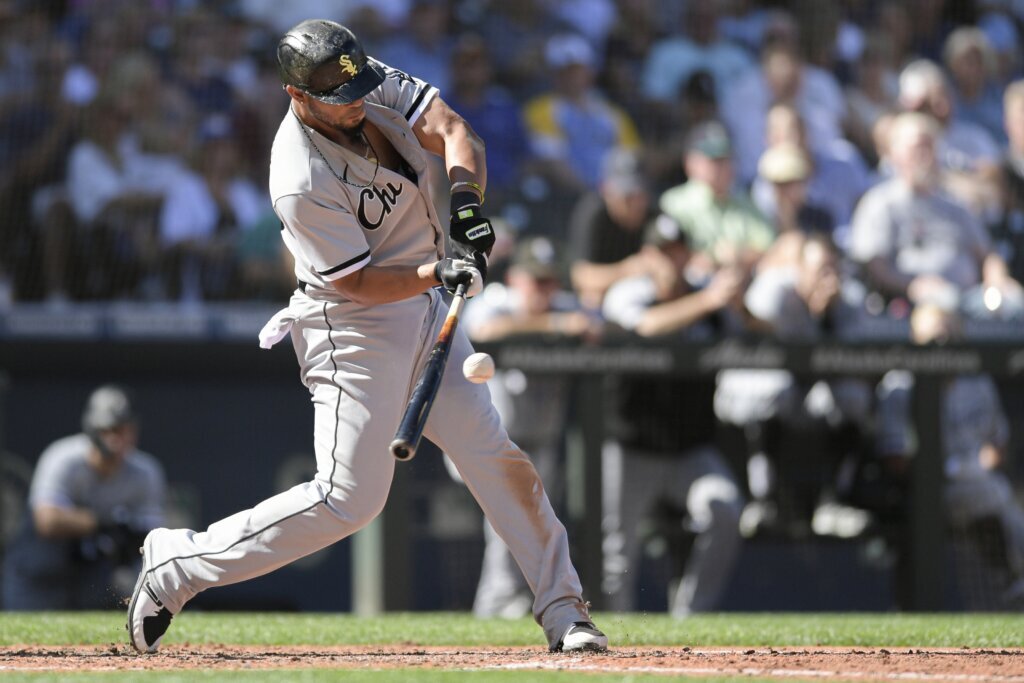 SEATTLE (AP) — Eloy Jiménez drove in three runs with a homer and double, Chicago took advantage of three errors, and the White Sox rallied to beat the Seattle Mariners 9-6 on Wednesday.

The White Sox took two of three in the series and stayed on the heels of Cleveland and Minnesota in the crowded AL Central race.

It looked early like it would be a series loss for the White Sox as Seattle starter Luis Castillo tied an American League record by striking out the first seven batters to start the game.

But Castillo made a mistake giving up Jiménez’s two-out home run in the fourth inning, and watched Chicago rally for four runs in the sixth inning that started with a fielding error by third baseman Eugenio Suárez.

Seattle got a pair of home runs by Suárez for hits Nos. 1,000 and 1,001 of his career. The second homer led off the seventh and pulled Seattle even at 6.

But the White Sox took advantage of another defensive mistake in the eighth. Jiménez singled with one out, and pinch-runner Leury García stole second and moved to third on a throwing error by catcher Curt Casali.

García scored easily on Gavin Sheets’ groundout that bounced high off the plate. Chicago added two more runs in the ninth after a throwing error by reliever Chris Flexen.

Aaron Bummer (1-1) allowed Suarez’s homer in the seventh inning, but pitched out of a jam after Seattle had runners at first and second and no outs and couldn’t add on.

Vince Velasquez pitched the eighth and Liam Hendriks struck out the side the ninth for his 31st save.

Seattle lost for just the fourth time in the past 15 games, but any loss with Castillo on the mound hurts as the Mariners are vying with Tampa Bay and Toronto for the top wild-card spot in the AL.

Castillo set a franchise record for most consecutive strikeouts to start a game. The first ball put in play by Chicago came with one out in the third inning when Josh Harrison grounded out on a 3-2 pitch.

But he couldn’t make it through the sixth inning. After Suarez’s error, José Abreu dribbled an RBI single through the infield and Jiménez’s RBI double pulled the White Sox even at 4.

Sheets hit a sacrifice fly and Andrew Vaughn capped the inning with an RBI double.

Castillo finished with eight strikeouts and only three of the six runs allowed were earned.

Castillo’s seven strikeouts to begin the game matched an AL record first accomplished by Joe Cowley for the White Sox on May 28, 1986. Carlos Rodón for the White Sox (Sept.30, 2016) and Blake Snell for Tampa Bay (June 3, 2018) also struck out the first seven batters of the game.

White Sox: OF Luis Robert was out of the lineup a day after getting hit on his left fingers during a swing. Acting manager Miguel Cairo said Robert was day-to-day but was already dealing with a sore left wrist.

White Sox: RHP Dylan Cease (13-6, 2.13) will start the opener of a four-game series in Oakland on Thursday. Cease was one out from a no-hitter in his last start against Minnesota. The no-hitter was broken up by Luis Arraez.

Mariners: LHP Robbie Ray (12-8, 3.45) will start the opener of a three-game series against Atlanta on Friday. Ray threw six shutout inning in his last start against Cleveland.

iPhone 14 to AirPods Pro 2: Everything Apple announced at ‘Far Out’ event