White steps in, focused on giving Jets a ‘fighting chance’ 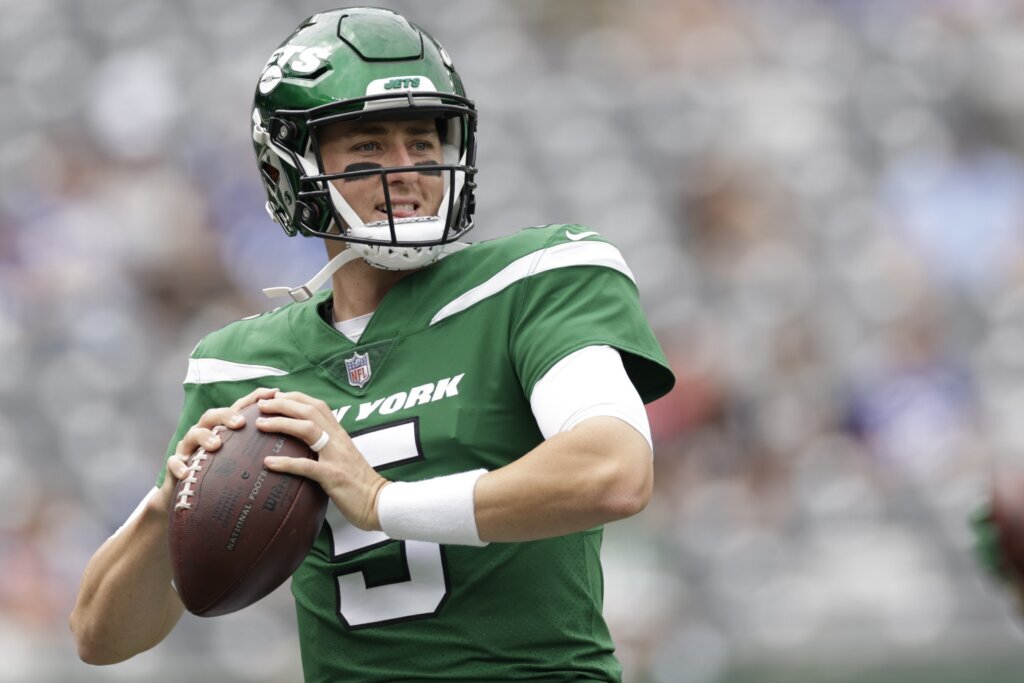 FLORHAM PARK, N.J. (AP) — Mike White has already made it into the Pro Football Hall of Fame. So replacing…

FLORHAM PARK, N.J. (AP) — Mike White has already made it into the Pro Football Hall of Fame.

So replacing a struggling Zach Wilson and trying to spark a stagnant offense should be no biggie for the New York Jets’ new starting quarterback.

“Any time you step in the huddle as a quarterback and you have grown men looking at you, it means something to me, whether we’re 0-16 or if we’re fighting for a playoff spot,” White said. “I’m focused on the Bears and focused on performing well enough for these guys in the locker room and help give us all a fighting chance to win ballgames.”

That’s all the Jets — in the middle of the playoff hunt at 6-4 — are asking of White, who’ll get his first regular-season NFL start in more than a year Sunday at MetLife Stadium against Chicago.

“For Mike, it’s obviously a great opportunity for him,” coach Robert Saleh said. “And I know he’ll attack it.”

Saleh announced the team’s decision Wednesday it was benching Wilson, the No. 2 overall pick in last year’s draft, and starting White. Wilson is coming off a brutal performance in New York’s 10-3 loss at New England last Sunday during which he was 9 of 22 for just 77 yards. The Jets managed 2 total yards on seven possessions in the second half.

Saleh insisted it’s a temporary mental and physical “reset” for Wilson. The coach will evaluate the position daily, but this is now White’s opportunity.

“You’ve got to stay ready,” White said, “because when your moment does come and if you let it pass by, you’re going to look back on it and be frustrated with it.”

Entering last season, White was merely another arm in Jets camp. A few months later, he briefly became a headline-making folk hero for his three-touchdown, 405-yard performance in his first NFL start — a 34-31 win over Cincinnati.

White’s 37 completions set a league record for a player making his first start, and his jersey and game ball ended up on display in Canton, Ohio.

White was a fifth-round pick by Dallas out of Western Kentucky in 2018. He was signed to New York’s practice squad a year later and worked in relative obscurity while the focus was set on Sam Darnold and then Wilson.

When Wilson injured his right knee against New England in Week 7 last season, White replaced him and got the start the following week. In that victory against the Bengals — with fans chanting his name — White joined Cam Newton (2011) as the only players since 1950 to pass for at least 400 yards in their first career start.

But he hurt his right forearm early in a loss at Indianapolis and was intercepted four times the following week in a defeat against Buffalo. Joe Flacco replaced him as the starter until Wilson returned — and White hasn’t taken a snap in a regular-season game since.

And he wasn’t sure when — if ever — the next would come.

“You go through those mental battles,” White said, “and you’ve got to pick yourself back up and focus.”

Flacco started the first three games this season while Wilson was sidelined with another knee injury, and there were times the home crowd chanted for White to play as the Jets started 1-2.

He heard them, but couldn’t give in to wondering, “What if?”

“I appreciate the support,” White said. “But once you start to get out of this locker room, you can get down rabbit holes and let your mind wander and you kind of become unfocused.”

Last month, the Jets promoted White from No. 3 on the depth chart past Flacco. Saleh said they would want to see what White could do in case Wilson was injured.

Instead, he’ll be stepping in to provide a spark to the offense while Wilson sits on the bench for now and watches. But White refuses to think of himself as any sort of savior.

“If you start to play hero ball, I think that’s when things can go wrong,” he said. “So, I don’t believe that in any way. I’m just going to go out there and execute the game plan as coached and as talked about throughout the week and do it to the best of my ability.

”And fight like hell for my guys out there.”