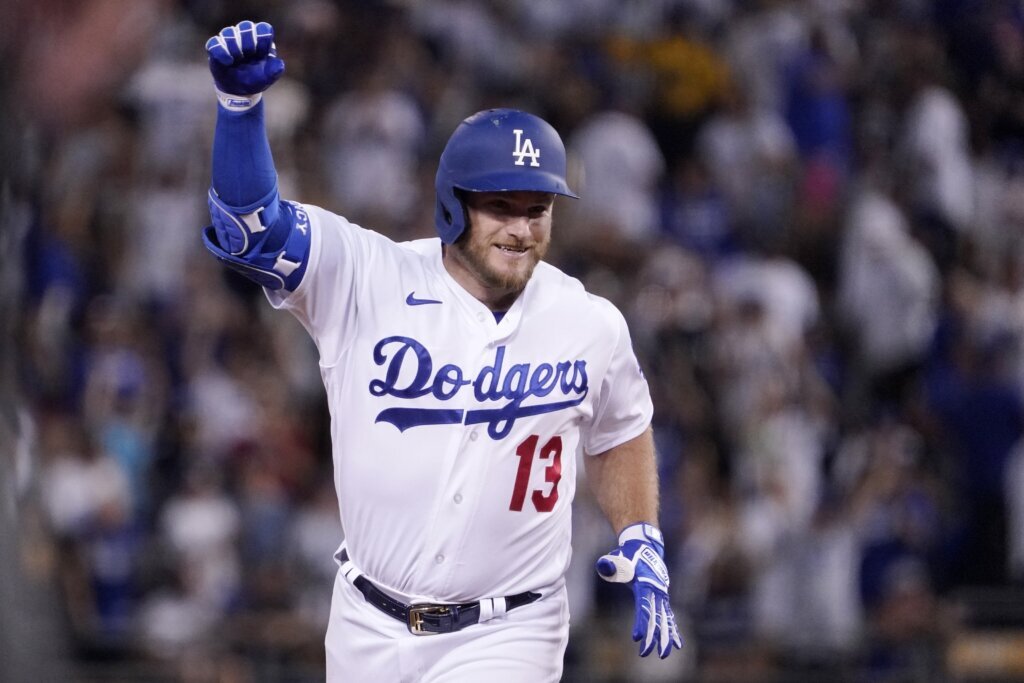 LOS ANGELES (AP) — Will Smith homered and drove in three runs, and the Los Angeles Dodgers continued to sprint…

LOS ANGELES (AP) — Will Smith homered and drove in three runs, and the Los Angeles Dodgers continued to sprint away from the rest of the NL West with their seventh consecutive victory, 8-3 over the second-place San Diego Padres on Saturday night.

Max Muncy hit a three-run homer in the fifth inning for the Dodgers, who boosted their division lead to a season-high 14 1/2 games with their 16th win in their last 18 meetings with San Diego.

The Dodgers also improved the majors’ best record to 74-33 with their 14th win in 17 games since hosting the All-Star Game last month.

Brandon Drury had an RBI double during a three-run fourth inning for the Padres, who have lost three straight. San Diego is 1-3 since adding Juan Soto, Drury and Josh Bell to the lineup.

Mike Clevinger (3-4) yielded seven hits and five runs while pitching into the fifth inning for San Diego. The Padres took a 3-2 lead into the fifth, but Muncy chased Clevinger by driving his 11th homer into the visitors’ bullpen.

Andrew Heaney lowered his ERA to 0.66 while pitching 4 2/3 innings of four-hit ball in his sixth start of the season for the Dodgers, his third since returning from three injury-plagued months.

Chris Martin (3-0) ended the Padres’ only rally by striking out Manny Machado, earning his second victory in four games with his new club.

Smith led off the second with his 16th homer, extending his hitting streak to nine games. The slugging catcher, who had three hits in Friday’s series opener, then drove in Mookie Betts with a two-out single in the third.

Heaney retired nine straight batters after Jurickson Profar led off the game with a double, but San Diego went ahead in the fourth with three unearned runs in a rally abetted by second baseman Gavin Lux’s error on Bell’s easy one-out grounder. Drury, Jake Cronenworth and Wil Myers followed with consecutive RBIs.

After Muncy homered in the fifth for the latest step forward in his previously dismal season, Freddie Freeman and Smith drove in runs with sacrifice flies in the seventh. Betts started the rally with a single before Machado made a key error — to the delight of the Dodgers fans who boo their former third baseman relentlessly.

Cody Bellinger added an RBI double off the wall in the eighth.

Dodger Stadium was packed for the second straight night, with 52,124 fans watching the Southern California rivals. One night earlier, the Dodgers’ celebration of Vin Scully was one of the hottest tickets in recent LA history.

Padres: RHP Robert Suárez returned from the 60-day injured list and yielded two hits and a run in the eighth. He had been out since June 5 after knee surgery.

Dodgers: LHP Clayton Kershaw (low back pain) had an epidural injection, and an MRI exam revealed nothing new, manager Dave Roberts said. The team hasn’t decided when Kershaw will pick up a baseball again, but Roberts thinks “it’s going to be shorter-term, rather than longer-term.” … Dodgers relievers Blake Treinen (shoulder) and Brusdar Graterol (shoulder) both threw an inning in a simulated game, and both came out “really good,” Roberts said. Graterol is still about 10 days from returning, and Treinen isn’t expected back until September.

Har Ghar Tiranga: Post Offices to remain open on all days till I-Day