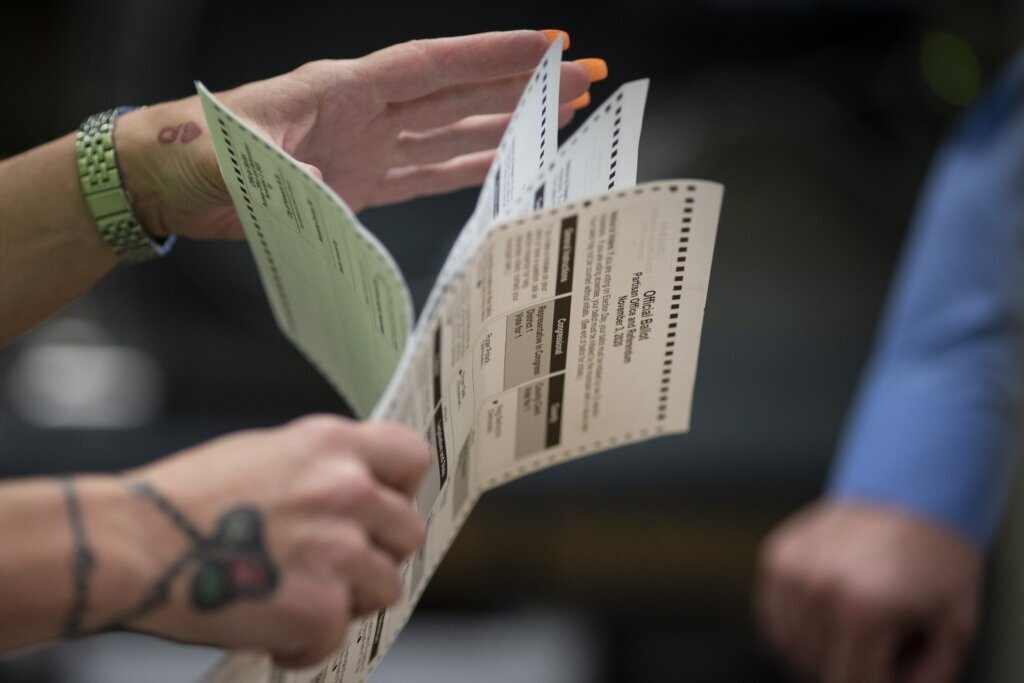 MADISON, Wis. (AP) — A Wisconsin judge on Wednesday ruled that state law does not allow election clerks to fill…

MADISON, Wis. (AP) — A Wisconsin judge on Wednesday ruled that state law does not allow election clerks to fill in missing information on witness certification envelopes that contain absentee ballots, delivering a victory to Republicans nine weeks before the election in the battleground state.

The lawsuit, backed by the GOP-controlled Legislature, is the latest move by Republicans to tighten restrictions on absentee voting in the swing state where Democratic Gov. Tony Evers and Republican Sen. Ron Johnson are on the ballot in November.

Waukesha County Circuit Judge Michael Aprahamian on Wednesday granted GOP motions to immediately block the practice, known as ballot curing. The case is expected to ultimately go to the conservative-controlled Wisconsin Supreme Court, which in July ruled that absentee ballot drop boxes located outside of clerk offices are illegal.

Local election officials do not have the authority under the law to modify absentee ballot certificates, nor does the state elections commission have the right to order that they take that action, the judge said. He accused the elections commission of “stubborn and unjustified adherence to its guidance” that was contrary to state law.

An attorney for Democrats said he planned to file a motion to stay the ruling pending appeal. A hearing was set for Tuesday.

The judge agreed with Republicans that 2016 Wisconsin Elections Commission guidance issued to the state’s 1,800-plus local election clerks saying that they can cure ballot certificates without contacting the voter is illegal. Clerks only address problems on the witness certificate, which doubles as an envelope, and not the ballot itself. Republicans did not contest the practice until after Donald Trump’s narrow loss in 2020, when nearly 1.4 million voters cast absentee ballots and COVID-19 vaccines weren’t available yet.

“This isn’t a case about counting votes,” said George Burnett, attorney for the Republican Party of Waukesha County, which brought the lawsuit. “This is a case about stopping the issuance of guidance that violates Wisconsin law.”

The Waukesha County Democratic Party, which is defending the practice, argues that Republicans are trying to create confusion and uncertainty just weeks before early voting begins. All absentee ballots in Wisconsin must be sent to voters by Sept. 22. The guidance has been in effect for more than 20 statewide elections, and Democrats argue it is lawful and necessary to comply with the federal Civil Rights Act.

The issue was previously raised by Trump after he narrowly lost the 2020 election. The Wisconsin Supreme Court did not directly address it in upholding Trump’s loss, but four of the seven justices suggested that the guidance allowing clerks to cure absentee ballot certificates was reasonable.

Republicans have been trying for months to undo the guidance from the elections commission. In January, a GOP-led legislative committee told the commission to suspend its guidance or submit a proposed rule to clarify it. When the commission submitted its emergency rule, Republican lawmakers blocked it. The commission’s position was that the underlying guidance remains in effect, but that judge declared it invalid and ordered the commission to notify clerks that it can’t be followed.

Both sides made their arguments in court before the judge ruled Wednesday.

Wisconsin law requires absentee ballots to be submitted in an envelope that contains a witness signature and the address of that person and the voter. The elections commission guidance said clerks could complete missing information without contacting the voter “if clerks are reasonably able to discern any missing information from outside sources.” For example, the clerk could fill in a missing address for the voter or witness if they knew the person or could verify the address on their own.

The judge agreed with Republicans that state law only allows clerks to return the ballot to the voter to correct it or to not count it.

The Legislative Audit Bureau last year reviewed nearly 15,000 absentee ballot envelopes from the 2020 election across 29 municipalities and found that 1,022, or about 7%, were missing parts of witness addresses. Auditors found that clerks had corrected addresses on 66 envelopes, or 0.4% of the sample.

The audit cautioned against extrapolating the findings statewide, however, noting that auditors reviewed ballot envelopes from nine of the 10 municipalities with the highest proportion of absentee ballots.

For more AP coverage of the midterm elections: https://apnews.com/hub/2022-midterm-elections