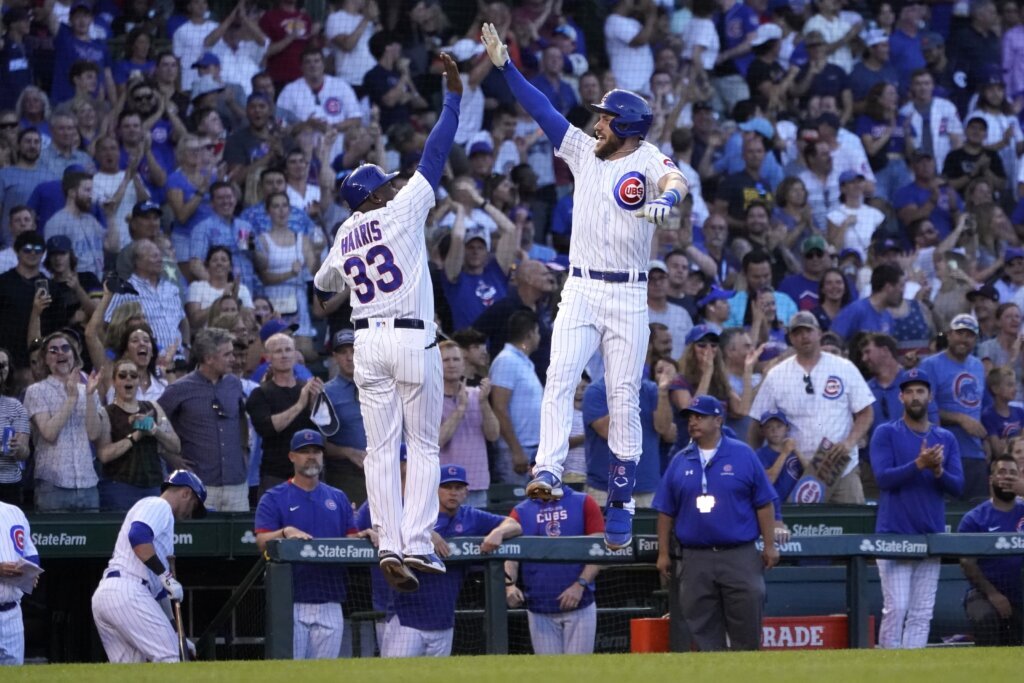 The Cubs collected 23 hits off five pitchers, tying their season high from a 21-0 rout of the Pirates on April 23. Seven of those hits came in the eighth against outfielder Max Schrock, who allowed a two-run homer to P.J. Higgins and a solo shot to Morel.

Wisdom’s slam off Graham Ashcraft capped a five-run second, and he also connected against Dauri Moreta in the sixth. It was his fifth multihomer game. He hit his other grand slam on Sept. 15, 2018 against the Dodgers while a member of the Cardinals.

Joey Votto continued his dominance of Hendricks by hitting a solo home run in the sixth and is batting .415 (17 for 41) with six homers lifetime against Hendricks.

Morel hit an RBI single that knocked out Ashcraft in the third, and he hit a double in the seventh and that set up Narciso Crook’s first major league hit, a double down the left-field line.

“I was thinking, ‘I need to beat this out,’ because I want to get that RBI,“ Crook said.

Morel is 7 for 9 with a double, two homers and four RBIs since being dropped to the ninth spot Wednesday.

Nico Hoerner extended his hitting streak to a career-high eight games with a single in the fourth and finished with three hits.

Ashcraft (4-2) allowed a career-high seven runs in 2 1/3 innings and has allowed six runs or more in two of his last three starts.

The Cubs selected Crook, 26, from Triple-A Iowa prior to Thursday’s game. This marked the first time Crook has been placed on a major league roster after 8 1/2 seasons, 564 games and 1,835 at-bats.

“In my heart, I always knew I was a big leaguer, and I always wanted to prove that to myself,” said Crook, who was drafted by the Reds in the 23rd round out of Rowan College in New Jersey in 2013. “I’m not a quitter.”

Crook grounded into a double play in the fifth in his first at-bat.

Cubs: OF Jason Heyward (right knee inflammation) was placed on the 10-day injured list, retroactive to June 27. OF Michael Hermosillo was transferred to the 60-day IL. OF Seiya Suzuki (left ring finger sprain) went 2 for 3 with a home run and two RBIs against Columbus in his first game on a rehab assignment for Iowa.

Cubs RHP Adrian Sampson (0-0, 1.69) will face the Red Sox in Friday’s series opener at Wrigley Field. Sampson allowed two runs in five innings of a 5-3 loss Saturday to the Cardinals.