With forests abound, Africa looks to grow its carbon market 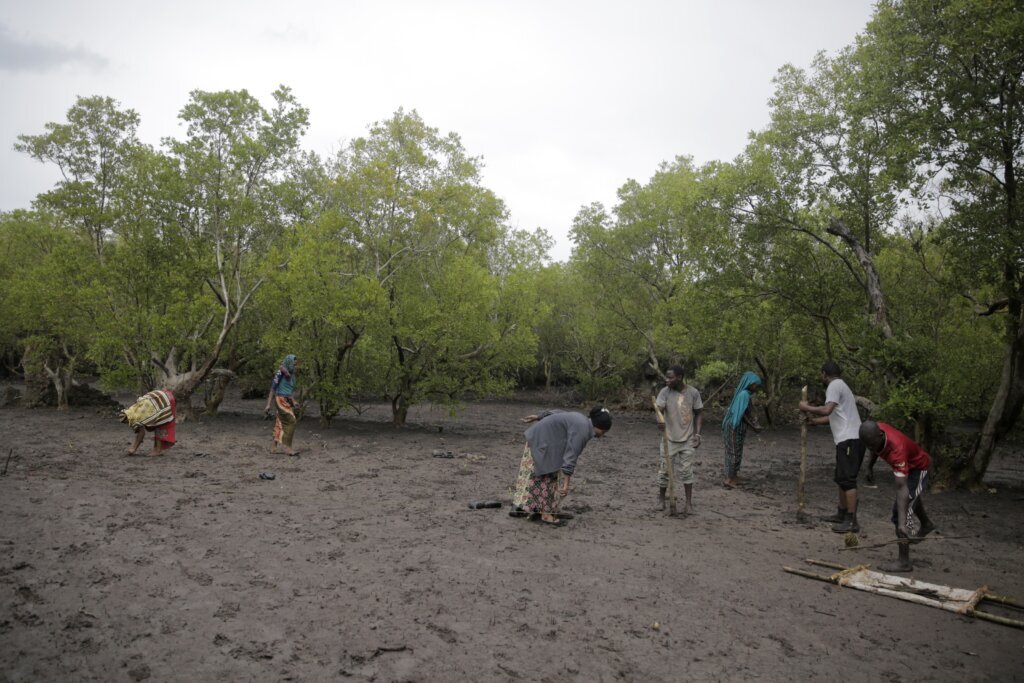 MOMBASA, Kenya (AP) — In villages dotted across the African continent, locals living in once-heavily forested regions are starting to…

MOMBASA, Kenya (AP) — In villages dotted across the African continent, locals living in once-heavily forested regions are starting to find their land in high demand.

In Kenya’s Gazi Bay, arguably the continent’s most famous mangrove restoration project, thousands of trees have been planted thanks to nearly a decade of concerted efforts to offset carbon dioxide released by faraway governments and companies seeking to improve their climate credentials. The initiative was one of Africa’s first steps into the carbon market, where credits to emit greenhouse gases can be bought or sold.

Since then, dozens of similar schemes have sprouted across the continent, with African governments now looking to capitalize on this exploding global industry. The continent is home to huge swaths of carbon-absorbing lands, with forest covering roughly 674 million hectares, or 22.7%, of Africa, according to the U.N. Food and Agriculture Organization. The Cuvette-Centrale Peatlands deep in the Congo Basin are alone capable of locking in up to 30 billion tons of carbon, or three years worth of the world’s emissions.

Waterside mangrove forests, which are more effective at sucking carbon out of the air than their land counterparts, have swelled in places like Gazi. Community-led voluntary initiatives in Kenya, Mozambique and Ivory Coast that restore thousands of hectares of forest are supported by large international carbon credit organizations such as Blue Forest and the World Resources Institute.

“The carbon market is changing everything,” said Vahid Fotuhi, founder of the Blue Forest initiative, at the Africa Climate Week conference in Gabon in early September. “Suddenly, trees are worth more alive than dead. By tapping into carbon markets, communities … can access carbon offset funding which helps them conserve their forests whilst also improving livelihoods. It is a win-win.”

Although many of these carbon credit schemes are based in Africa, where emissions are far lower and the consequences of climate change far greater than many other parts of the world, the continent remains largely excluded from the carbon market.

Between 2002 and 2020 just 14% of all the carbon credits issued came from Africa. In 2021, Gabon became the first African country to receive payments from the Central African Forest Initiative for reducing carbon emissions through forest protection, a total of $17 million so far.

Carbon markets can be voluntary or set by international policies, known as regulatory compliance. In voluntary schemes, which are more advanced in Africa, companies that wish to generate carbon credits must hire independent third party verifiers to confirm that carbon emissions would have been released were it not for the credit.

“Carbon offsets provide an opportunity for Africa to tap into the value of its natural assets,” said Jean-Paul Adam, head of the climate division of the U.N. Economic Commission for Africa.

But he added: “The relatively low cost of carbon and limited capacity in African financial markets, however, have remained barriers to this becoming a meaningful financing opportunity.”

One tradeable carbon credit represents one ton of greenhouse gas, with prices usually fluctuating between $10 to $100 per ton of carbon dioxide, according to the United Nations development agency. The price for one ton of carbon is about $10 or less in Africa, but in Europe carbon pricing is pegged at $80 to $90 per ton, with the U.S. pricing carbon at $140.

Africa is looking to push for better and standardized prices on carbon during the upcoming United Nations conference of parties, known as COP27, scheduled for Sharm El Sheikh in Egypt in November.

“It boils down to bookkeeping,” said Fotuhi. “African governments need to diligently account for their nature-based carbon stocks as well as their greenhouse gas emissions” to allow them to make the best use of carbon offset schemes, he said.

He added that if nations have more “clarity” around their goals to reduce their carbon emissions they would be able to have “a more dominant role in global carbon markets.” Countries need to submit their emissions reductions plans to the U.N. in what’s known as nationally determined contributions, which are non-binding and part of the 2015 Paris Agreement.

Most African governments are outlining plans to cut their reliance on fossil fuels as many are already feeling the effects of climate change through drought, extreme heat and cyclones. The African Development Bank estimates that addressing climate change will require between $3.5 and $4 trillion by 2030 for countries to adapt and reduce their reliance on fossil fuels.

“Even though Africa is sucking up carbon from the atmosphere, which is a huge global benefit, we cannot afford to be part of the problem,” said Agnes Kalibata, president of the Alliance for a Green Revolution in Africa.

She added that more climate financing for Africa through carbon credits would greatly help the continent adapt, particularly in the case of food and agriculture systems that are at risk due to climate change.

Kalibata added that carbon markets can and should be “more equitable” particularly toward farmers “who are the custodians and managers of most of the world’s carbon stocks.”