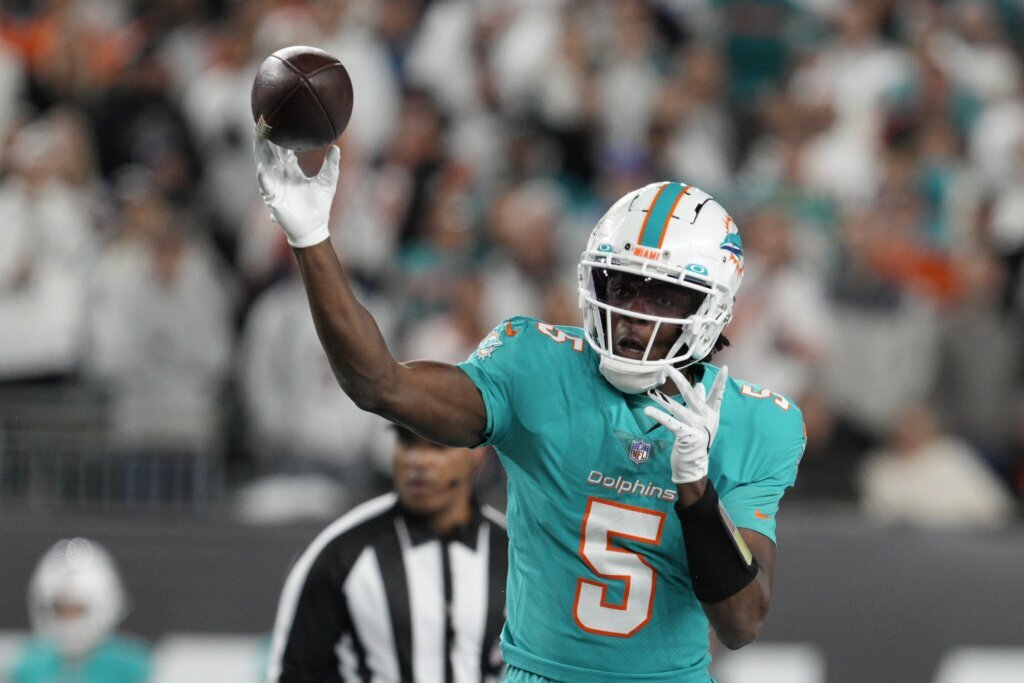 MIAMI GARDENS, Fla. (AP) — The Miami Dolphins started 3-0 thanks in part to their efficiency in the red zone…

MIAMI GARDENS, Fla. (AP) — The Miami Dolphins started 3-0 thanks in part to their efficiency in the red zone and some inspired play late in games by quarterback Tua Tagovailoa.

They didn’t have either Thursday night against Cincinnati.

Tagovailoa was stretchered off the field with a concussion, and backup Teddy Bridgewater threw a late-game interception that effectively sealed the Bengals’ 27-15 victory.

Miami scored once in three trips to the red zone and was outscored 13-0 in the fourth quarter.

“We lost the turnover battle, and we were kicking field goals as opposed to trying to score touchdowns,” coach Mike McDaniel said.

The Dolphins’ bigger concern will be the health of Tagovailoa, who underwent further testing on Friday and remains in the concussion protocol.

Bridgewater said after the game that it was particularly hard for him to see Tagovailoa go down. Bridgewater suffered a concussion last year while playing for Denver against Cincinnati and was carted off the field.

“It’s fun to compete. It’s fun to score touchdowns and make plays, but it’s that one side of the game that really sucks. And it’s unfortunate,” Bridgewater said. “For me, I just think about my son. And one day he’s going to be old enough to use Google, and he’s going to Google his dad, and he might see his dad getting carted off on the field, or his dad had a concussion. All those things play in your head.”

Bridgewater is expected to start in Week 5 against the New York Jets. He completed 14 of 23 passes for 193 yards with a touchdown and an interception against the Bengals.

“Guys have a lot of confidence in him,” McDaniel said, “and guys have confidence in our whole quarterback room, really. It’s one of the strengths of our football team and I think guys rely on that. Tua, Teddy and Skylar (Thompson) have performed in a great working group and our guys believe in all three of them.”

The Dolphins continue getting the ball to their dynamic playmakers. Tyreek Hill caught 10 passes on 14 targets for 160 yards against the Bengals, including a 64-yard reception from Bridgewater that allowed Miami to take the lead in the third quarter.

Third-down efficiency. The Dolphins converted on two of 10 third-down attempts Thursday night while allowing the Bengals to convert on eight of 15 tries — including all three of their touchdowns. Joe Burrow connected with Tee Higgins for a 59-yard TD on third-and-11.

Trent Sherfield. With receiver Cedrick Wilson inactive because of a rib injury, Sherfield was productive as a No. 3 option behind Hill and Jaylen Waddle. He was targeted six times and caught four passes for 55 yards. Sherfield figures to remain in that role until Wilson is healthy.

The running game. Miami has one of the worst rushing offenses in the league. Raheem Mostert rushed 15 times for 80 yards against the Bengals, but Cincinnati only gained 85 total yards on the ground.

In addition to Tagovailoa’s injury, cornerback Xavien Howard suffered a groin injury in the third quarter. Howard had already been listed with a groin issue.

4 — Thursday was the fourth time this season that the Dolphins had a receiver top 100 yards. That happened just twice for Miami last season.

The Dolphins get extra time to regroup before facing the New York Jets on the road on Oct. 9.