Wolves include Ruben Amorim, Julen Lopetegui and Pedro Martins on shortlist as they search for Bruno Lage replacement

Then slept on it before informing the 46-year-old Portuguese his services were no longer required in the morning, as they terminated his 16-month stay at Molineux.

Wolves’ recruitment team – led by Chairman Jeff Shi – will complete a whirlwind 48 hours by drawing up a provisional list of contenders to halt the club’s slide down the table.

Wolves’ dream ticket would be Sporting Lisbon boss Ruben Amorim, who has emerged as the bookies’ early 7/4 favourite for the Molineux job.

The 37-year-old is one of the hottest properties in European football after ending Sporting’s 19-year-wait to win the Portuguese title in his first full season in charge in 2021-2022.

Amorim inspired the Lisbon giants to a record-breaking 32-match unbeaten run on the way to the title and followed that up last season by leading Sporting to the Last 16 of the Champions League before being knocked out by Manchester City. 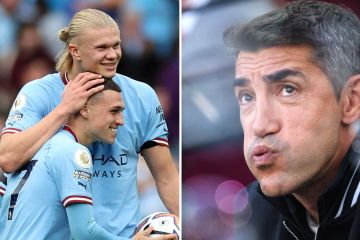 This season he has already beaten Tottenham in the Champions League despite seeing two of his best players Joao Paulinha and Matheus Nunes sold from under him to Premier League clubs Fulham and, ironically, Wolves.

However, despite the attraction of teaming up with Nunes and Wolves’ sizeable Portuguese colony in the Premier League, the former Manchester United and Chelsea target may feel he has bigger fish to fry.

He also comes with a £20million price tag – double the £10m Sporting paid to lure him from Braga.

A cheaper option would be Sevilla manager Julen Lopetegui, who is on the brink of losing his job.

The LaLiga giants have been flirting with former boss and fan favourite Jorge Sampaoli, after a poor start to the season.

Lopetegui’s time at Sevilla looks to be over despite leading the club to three Champions League qualifications and winning the 2020 Europa League after beating Inter Milan in the final.

He was a Wolves target before the decision was made to appoint Lage and still has admirers in the Molineux corridors of power.

Pedro Martins is another strong contender after the Portuguese coach was sacked by Olympiacos owner Evangelos Marinakis, despite winning a hat-trick of titles for the Greek champs.

Former AC Milan and Napoli boss Gennaro Gattuso is currently in charge at Valencia but would certainly provide the passion, many Wolves fans believe Lage failed to instil in his players.

Portuguese super agent Jorge Mendes looks after Gattuso and will be part of the recruiting process, as he advises on potential candidates but the final decision will rest with Wolves’ Chairman Jeff Shi on behalf of the club’s Chinese owners Fosun.

Lage, 46, was doomed before the final whistle sounded at West Ham as Wolves fans jeered their beleaguered boss and chanted: “You don’t know what you’re doing,” during the 2-0 defeat.

Afterwards star midfielder and Lage’s captain Ruben Neves seemed to suggest the players were equally puzzled by their coach’s tactics, with Wolves managing just one win in their last 15 Premier League games.

Lage replaced Nuno Espirito Santo in June 2021, finishing a creditable 10th in his debut season but the optimism dried up along with Wolves’ goals as the Portuguese tactician suffered a striker curse which he never recovered from.

Raul Jimenez and Fabio Silva struggled and when Lage was allowed to spend £15m on Stuttgart striker Sasa Kalajdzic this summer, the hitman suffered knee ligament damage on his debut.

Lage’s final throw of the dice was a desperate move to sign veteran striker Diego Costa, who made his first appearance since 2021 as a sub against West Ham – but not even the fearsome frontman could save him by then.

Wolves chairman Jeff Shi said: “Bruno is an excellent coach, a hardworking and dedicated manager, and a warm, wise and honest man.

“He and his staff have been a pleasure to work with throughout their time at Wolves, so it is with much sadness that we have had to make what has been a difficult decision.

“I honestly have no doubts about Bruno’s ability, and I’m sure he will succeed elsewhere, however the team’s form and performances over the last few months mean that we have no choice but to act.”