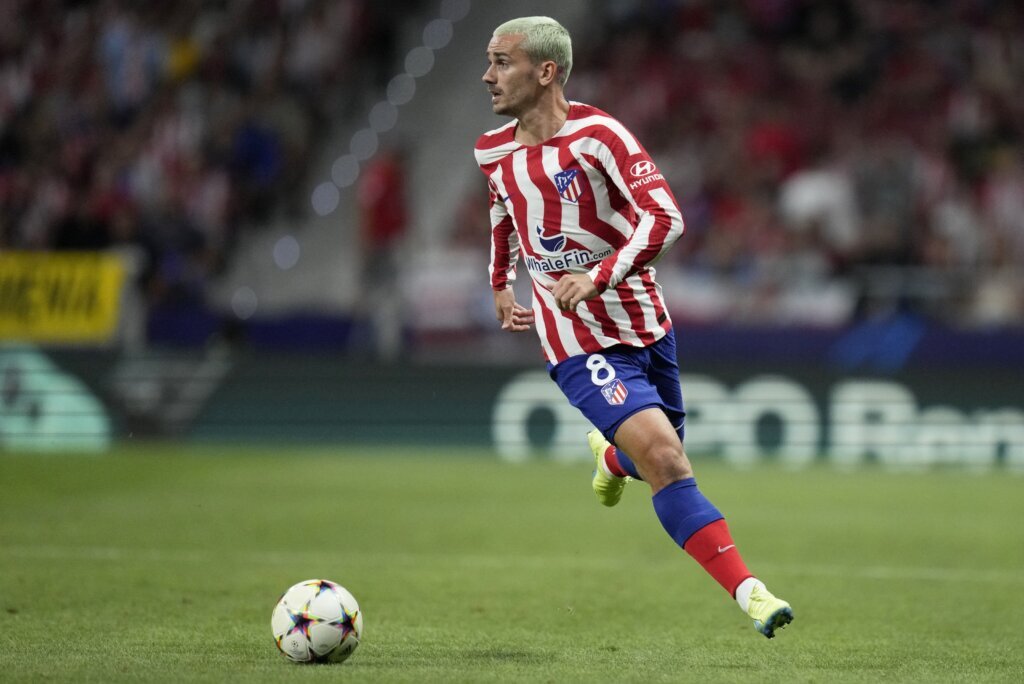 MADRID (AP) — Less could be more for Antoine Griezmann going into the World Cup. The France forward has been…

MADRID (AP) — Less could be more for Antoine Griezmann going into the World Cup.

The France forward has been getting few minutes with Atlético Madrid because of a unique contractual dispute with Barcelona, but with his World Cup spot not really in danger, he may end up being one of the few players arriving fresh for the tournament in November.

Griezmann has been on the bench at Atlético while the Spanish club reportedly tries to avoid having to pay Barcelona 40 million euros ($40.5 million) if he plays more than 45 minutes on average in a number of matches during his loan. Atlético coach Diego Simeone has used the forward only after the 60-minute mark in all six of the team’s matches this season.

The 31-year-old Griezmann, a World Cup champion with France four years ago, is in the second of his two-year loan from Barcelona. He was a star at Atlético from 2014-19 before moving to the Catalan club for two disappointing seasons.

“It is what it is, it’s not up to me,” Griezmann said. “Of course, I want to play more, but I will give everything I have in the minutes that I get. I am a team player, I am happy here and I just want to play and give it all for the club, for Simeone and for the fans.”

And Griezmann has certainly made the most of his time on the field so far, performing well whenever he comes off the bench. He has scored three goals already, including a stoppage-time winner in Atlético’s victory over Porto in the team’s Champions League opener last week.

“At this point in the season, he is helping us this particular way, and it shows in the quality of the minutes he plays, and in his hierarchy,” Simeone said. “What we know is that in 30 minutes he has been playing very well. We don’t know how it would be in 60. I can only go by what we know.”

If Griezmann keeps playing well while not getting too overworked, he could arrive at the World Cup in great physical condition while the majority of players will be coming off a schedule of non-stop games prompted by the tight calendar of a World Cup year.

Griezmann would be in good position to be the third starter in a France attack that is expected to be spearheaded by Kylian Mbappé and Karim Benzema. France coach Didier Deschamps’ other choices up front include Wissam Ben Yedder, Kingsley Coman, Moussa Diaby, Ousmane Dembélé, Olivier Giroud and Christopher Nkunku.

And the good thing for France if Griezmann does arrive in top form, there will be no limit on his playing time.

Just 10 weeks before France begins its title defense against Australia, Paris Saint-Germain said central defender Presnel Kimpembe will miss the next six of them with a left hamstring injury.

Competition for places has heated up with William Saliba emerging at Arsenal and both Samuel Umtiti and Clément Lenglet leaving Barcelona on loan — for Lecce and Tottenham, respectively — to seek more playing time and also cut the Spanish club’s salary bill.

Just in time, Leroy Sané is finally starting to live up to expectations at Bayern Munich.

The Germany forward has endured a frustrating spell in Munich since his big-money return to Germany from Manchester City in 2020. He was even booed by Bayern’s fans last year.

But the 26-year-old Sané seems like a new player this season. He has been producing impressive performances in the Bundesliga and was “man of the match” in Bayern’s 2-0 win at Inter Milan in the Champions League last week, scoring one goal and setting up the other.

That’s good news for Germany coach Hansi Flick, who has also played Bayern midfielder Jamal Musiala on the left wing. Sané has 11 goals in 45 appearances for Germany but is not yet an undisputed starter.

“When he’s in the mood and brings his qualities to the field,” Bayern sporting director Hasan Salihamidžić said, “he can be one of the best players in Europe.”