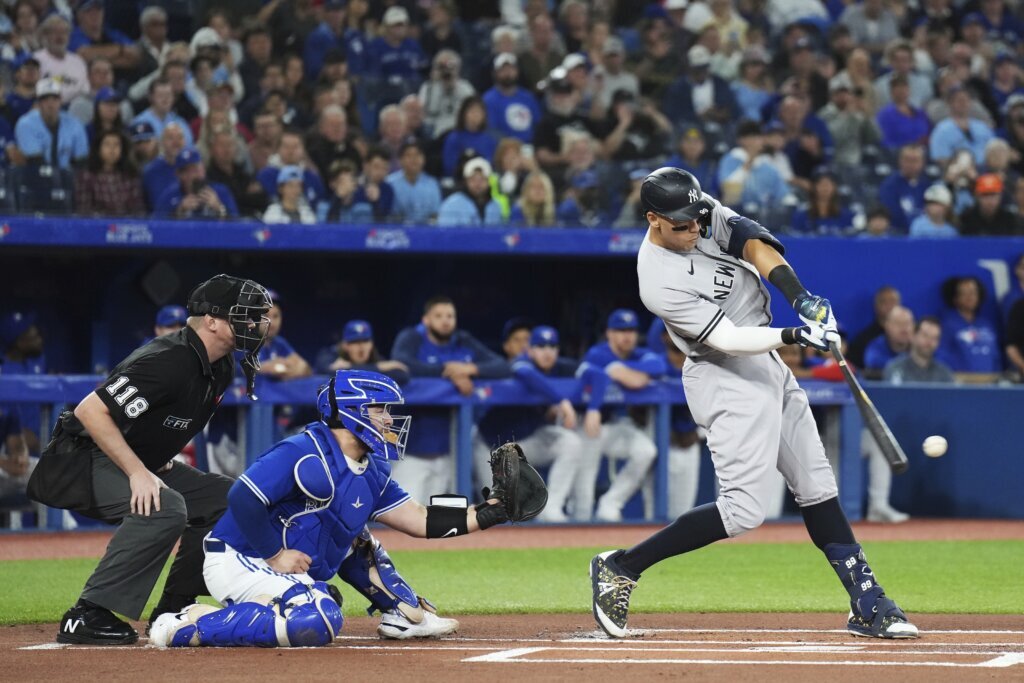 TORONTO (AP) — Aaron Judge tied Roger Maris’ American League record of 61 home runs in a season, hitting a tiebreaking, two-run drive for the New York Yankees in the seventh inning that led them over Toronto Blue Jays 8-3 on Wednesday night.

The 30-year-old slugger drove a 94.5 mph belt-high sinker with a full-count from left-hander Tim Mayza over the left-field fence at Rogers Centre. The 117.4 mph drive took just 3.8 seconds to land 394 feet from the plate, and it put the Yankees ahead 5-3.

Judge watched the ball clank off the front of the stands, just below two fans who reached over a railing and tried for a catch. He pumped an arm just before reaching first and exchanged a slap with coach Travis Chapman.

“I was hoping it would get over the fence. I didn’t know at first. I didn’t want to be standing at home plate when it hits the wall,” Judge said. “It’s an incredible honor. There’ was a lot of emotions. It took me a little longer than I wanted to.”

The ball dropped into Toronto’s bullpen and was picked up by Blue Jays bullpen coach Matt Buschmann, who turned it over to the Yankees.

Judge’s mother Patty and Roger Maris Jr. rose and hugged from front-row seats. He appeared to point toward them after rounding second base.

“I’m nothing without my family,” Judge said. “Getting to share this moment with my mom and also try to give a little nod to Roger Maris Jr., it means a lot that he shows up here.”

Judge was congratulated by the entire Yankees team, who gave him hugs after he crossed the plate.

“That was pretty cool. I wasn’t expecting it,” Judge said.

Judge moved past the 60 home runs Babe Ruth hit in 1927, which had stood as the major league mark until Maris broke it in 1961. All three stars reached those huge numbers playing for the Yankees.

Barry Bonds holds the big league record of 73 for the San Francisco Giants in 2001.

Judge had gone seven games without a home run — his longest drought this season was nine in mid-August. This was the Yankees’ 155th game of the season, leaving them seven more in the regular season.

Judge is hitting .313 with 130 RBIs, also the top totals in the AL. He has a chance to become the first AL Triple Crown winner since Detroit’s Miguel Cabrera in 2012.

Maris’ mark has been exceeded six times, but all have been tainted by the stench of steroids. Mark McGwire hit 70 home runs for the St. Louis Cardinals in 1998 and 65 the following year, and Bonds topped him. Sammy Sosa had 66, 65 and 63 during a four-season span starting in 1998.

McGwire admitted using banned steroids, while Bonds and Sosa denied knowingly using performing-enhancing drugs. Major League Baseball started testing with penalties for PEDs in 2004, and some fans — perhaps many — until now have considered Maris the holder of the “clean” record.

Among the tallest batters in major league history, the 6-foot-7 Judge burst on the scene on Aug. 13, 2016, homering off the railing above Yankee Stadium’s center-field sports bar and into the netting above Monument Park. He followed Tyler Austin to the plate and they become the first teammates to homer in their first major league at-bats in the same game.

Judge hit 52 homers with 114 RBIs the following year and was a unanimous winner of the AL Rookie of the Year award. Injuries limited him during the following three seasons, and he rebounded to hit 39 homers with 98 RBIs in 2021.

As he approached his last season before free agent eligibility, Judge on opening day turned down the Yankees’ offer of an eight-year contract worth from $230.5 million to $234.5 million. The proposal included an average of $30.5 million annually from 2023-29, with his salary this year to be either the $17 million offered by the team in arbitration or the $21 million requested by the player.

An agreement was reached in June on a $19 million, one-year deal, and Judge heads into this offseason likely to get a contract from the Yankees or another team for $300 million or more, perhaps topping $400 million.

Judge hit six homers in April, 12 in May and 11 in June. He earned his fourth All-Star selection and entered the break with 33 homers. He had 13 homers in July and dropped to nine in August, when injuries left him less protected in the batting order and pitchers walked him 25 times.

Maris was at 35 in July 1961 during the first season each team’s schedule increased from 154 games to 162, and baseball Commissioner Ford Frick ruled if anyone topped Ruth in more than 154 games “there would have to be some distinctive mark in the record books to show that Babe Ruth’s record was set under a 154-game schedule.”

That “distinctive mark” became known as an “asterisk” and it remained until Sept. 4, 1991, when a committee on statistical accuracy chaired by Commissioner Fay Vincent voted unanimously to recognize Maris as the record holder.