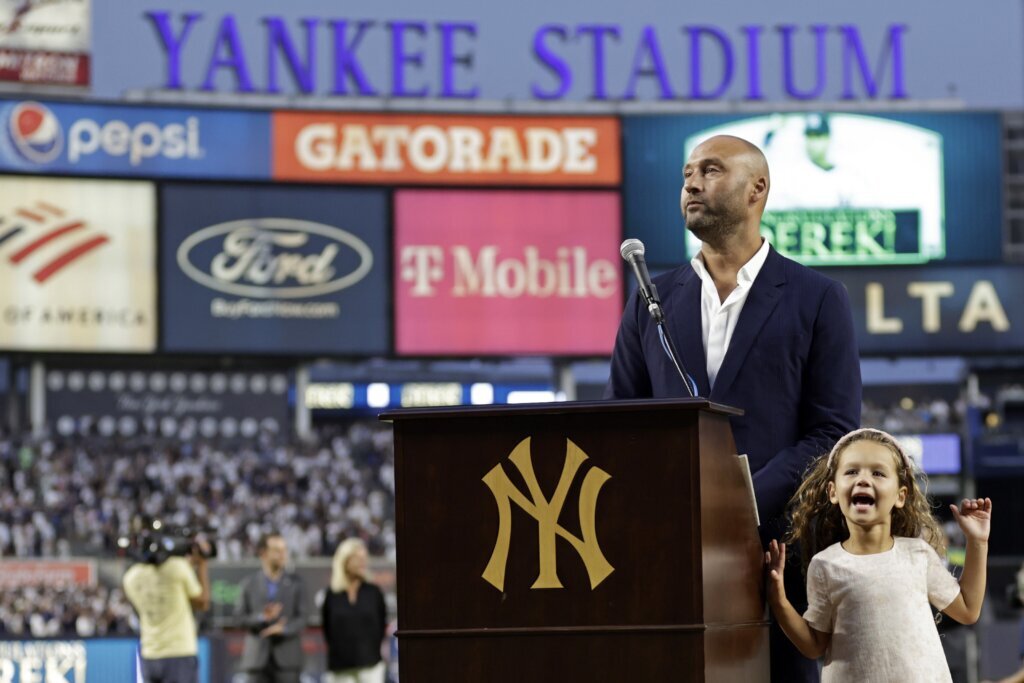 NEW YORK (AP) — Derek Jeter returned to Yankee Stadium five years after his number 2 was retired and was honored for his induction to the Hall of Fame two years ago.

With his Hall plaque on a stand in front of the pitcher’s mound, Jeter spoke at the end of a 27-minute ceremony before Friday night’s game against Tampa Bay.

“I was born in New Jersey. I grew up in Kalamazoo. I live now down in Miami,” he said near the end of his 4-minute speech. “But right here in front of you, with you, is where I really feel like I’m at home.”

Jeter led the Yankees to five World Series titles and was a 14-time All-Star in a 20-season career that ended in 2014. He was inducted into the Hall at Cooperstown after being picked on 396 of 397 ballots.

Jeter’s No. 2 was retired by the Yankees during a ceremony in May 2017, when a plaque honoring him was unveiled in Monument Park. He was CEO of the Miami Marlins from September 2017 to February 2022

“When they were kids, this was one of the faces of baseball on the most iconic team,” current Yankees manager Aaron Boone said.

After the guests were introduced, a video narrated by actor Billy Crystal was shown on the center field board. Accompanied by his wife and three daughters, Jeter emerged from the tunnel behind the left-center field wall on a cart that followed the warning track along the right field line toward the Yankees dugout before turning onto the field.

During the ride Jeter and his two oldest daughters, 5-year-old Bella and 3-year-old Story, waved to the crowd while 9-month-old River sat in mom Hannah’s lap, with the guest of honor mouthing “Thank you” several times. The large majority of fans in the ballpark remained on their feet throughout, chanting “De-rek Jeter!”

With Story and Bella standing behind him, hopping around and kicking the dirt, Jeter addressed his daughters by saying “I told you this place was special.”

Jeter said later he told the pair they would get ice cream if they stayed in their seats during the speech.

“They lost a deal,” he quipped.

Managing general partner Hal Steinbrenner, booed by the crowd, presented Jeter with a check to the Turn 2 Foundation for $222,222.22.

“They boo everybody here. I’ve been booed before,” Jeter said later. “Yankee fans, we’ve all been spoiled, right? I mean a lot of success that we’ve had over the course of my career, over the last 20-something years, there’s been a a lot of success and Yankee fans expect excellence.”

At old Yankee Stadium across 161st St., Jeter told then-President George W. Bush that he’d better throw his ceremonial first pitch from the rubber or else the crowd would boo. Now 48, Jeter ignored his own advice by throwing his first pitch from in front of the mound.

“They started booing me when I walked up in front of the mound. I haven’t thrown a baseball since I threw out the first pitch in 2017,” Jeter said. “I was a little scared I was going to bounce it.”