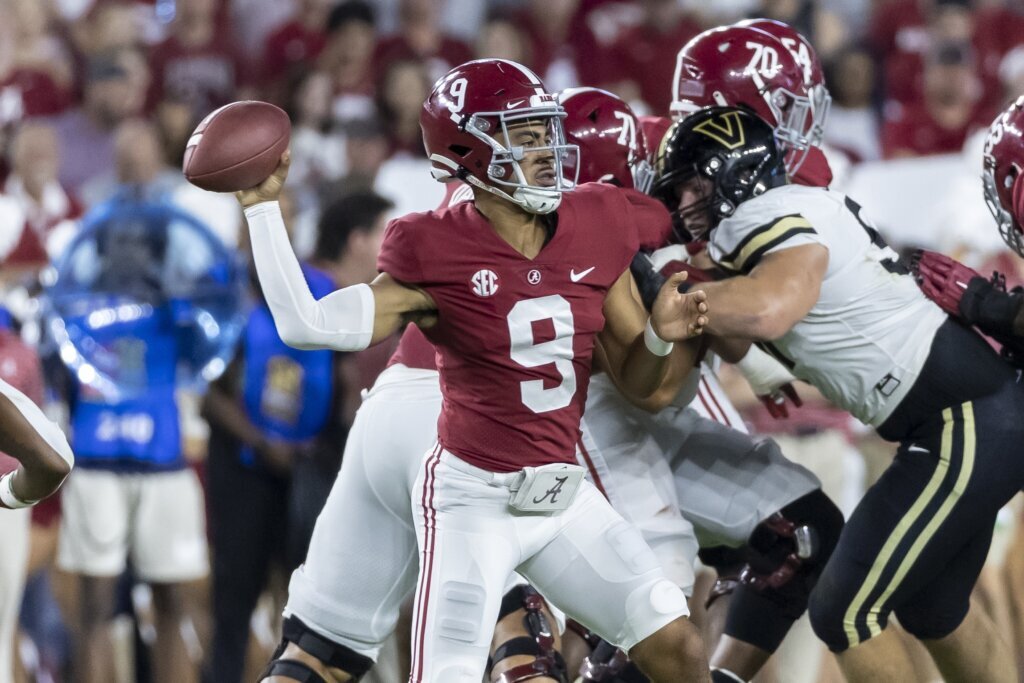 TUSCALOOSA, Ala. (AP) — Bryce Young passed for a season-high 385 yards and four touchdowns and No. 2 Alabama beat…

TUSCALOOSA, Ala. (AP) — Bryce Young passed for a season-high 385 yards and four touchdowns and No. 2 Alabama beat Vanderbilt 55-3 Saturday night in the Southeastern Conference opener for both teams.

It was the first 300-yard game of the season for the reigning Heisman Trophy winner, who didn’t play in the fourth quarter and completed 25 of 36 passes.

The Crimson Tide (4-0, 1-0) opted to air it out against the Commodores (3-2, 0-1) and finally got big games and plays from multiple receivers. It was the most passing yards for Young since perhaps locking up the Heisman with 421 yards against Georgia in the SEC championship game.

Ja’Corey Brooks had a career night, all in the first half when he had six catches for 117 yards and two touchdowns. Georgia transfer Jermaine Burton had his biggest game for the Tide: 94 yards on four catches, including a 48-yarder.

Jahmyr Gibbs, who started the first three games at tailback, mostly lined up at receiver while Jase McClellan took over in the backfield. McClellan ran for 78 yards and a touchdown on 11 carries. Gibbs caught three passes for 43 yards and a score.

Vanderbilt: Avoided a third straight shutout in the series after losing the last two meetings by a combined 93-0. It’s still the Commodores’ 23rd consecutive loss to the Tide and 22nd straight defeat against SEC teams.

Alabama: Gave future opponents, including three teams in a row who were ranked this week, something to think about with the downfield passing and lining up Gibbs as a receiver with such frequency. Linebacker Will Anderson Jr. had 2-1/2 sacks.

Brooks was mostly known for his tying touchdown in the final seconds against Auburn to force overtime last season. This was by far his biggest overall game. The sophomore had four catches for 62 yards through three games. Brooks caught passes on four consecutive plays for 68 yards and a TD on one drive.

It’s not out of the question that Alabama could return to the No. 1 spot — or at least close the gap — after Georgia struggled in a 39-22 win over Kent State. Tide coach Nick Saban, incidentally, is a Kent State alum.

Vanderbilt: Has a Saturday off before facing No. 16 Mississippi on Oct. 8.

Alabama: Visits No. 10 Arkansas to start a three-game stretch of facing ranked teams.