ZLATAN IBRAHIMOVIC showed off some hidden artwork as he underwent electrotherapy on his BUM.

The AC Milan superstar, 40, is fighting his way back to fitness after suffering what many assumed would be a career-ending knee injury last season.

He insists he has no plans to retire yet – and showed fans the lengths he is going to to get back on the pitch in an Instagram post this week.

But his 55 million followers got a little more than they bargained for when he shared the risque video.

The clip shows Ibrahimovic’s backside covered with tattoos as he receives the treatment.

And his bum can be seen twitching as he is given multiple electric shocks directly to the area. 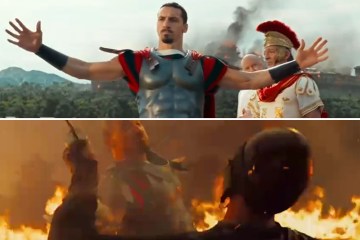 In his autobiography, the star describes having tattoos is “like a drug” as he shows off some new ink.

The AC Milan striker is thought to not be ready to take to the pitch again until the new year.

But this has not impacted the longevity of Ibrahimovic’s career as he dismissed retirement talk.

He told Gazzetta dello Sport: “I am arrogant, zero fear. I’m well, I’m working every day to come back.

“You will surely see it. When I come back, I will be heard, you can count on it. I will do it with violence.

“Patience is needed, that’s the key now. I’m not going to retire, I’m coming back and I won’t give up.

“If I see a player stronger than me, I’ll stop. But I haven’t seen him yet.”

He when shared the trailer for the upcoming Asterix & Obelix: The Middle Kingdom on Twitter.

Zlatan has landed the role of Roman centurion Oneofus in the latest film adaptation of the French classic.

Dish TV shareholders reject 4 resolutions at AGM, board strength down to 2